Russia and Serbia have warm ties, although last September president Aleksandar Vucic said Belgrade would not recognise the results of referendums held in four regions of Ukraine partly occupied by Russian forces.

"Good luck at the World Cup. We believe in your success brothers," the Russian team, who were not allowed to take their place in a qualifying play-off because of a FIFA ban over Moscow's invasion of Ukraine, wrote on their social media accounts.

At the Lusail stadium, some Serbia fans are expected to carry Russian flags. According to regulations, they are allowed to do so, but none of the flags can bear Russian military symbols.

Flags have been thoroughly checked at the Qatar World Cup, which started last Sunday.

Tidying up after one of their greatest #FIFAWorldCup wins 👏

Japanese courtesy was on full display again at the World Cup when the national team left their dressing room spotless with an extra touch of kindness after their incredible 2-1 comeback win against Germany on Wednesday.

While teams often leave the changing room in a messy state after wild celebrations, Japan's players folded their training vests and, for good measure, left paper cranes on the table.

"After a historic victory against Germany at the on Match Day 4, Japan fans cleaned up their rubbish in the stadium, whilst the @jfa_samuraiblue (national team) left their changing room at Khalifa International Stadium like this. Spotless," world governing body FIFA said with a picture of the immaculate room, with the floor appeared to have been swept as well.

A thank you note in Arabic and Japanese was also left on the table.

Pictures on social media were shared from the 2018 World Cup, where Japan left a dressing room spotless with a thank you note in Russian.

Japan fans also coordinated to clean up their rubbish in the stands at the Khalifa Stadium - an initiative witnessed at every game of their national team. 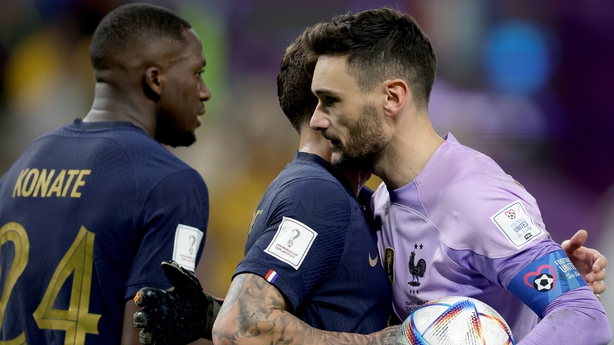 The French sports minister has urged the national football team to make themselves heard amid a row over FIFA's threat of sanctions for the OneLove armband.

On Wednesday, all Germany players placed their hands over their mouths in front of dozens of photographers on the pitch ahead of kick-off, after world soccer body FIFA had threatened seven European teams with sanctions if they wore the armband symbolising diversity and tolerance.

France are not among the seven teams, with French football federation (FFF) president Noel Le Graet saying it would "follow the guidelines of FIFA".

"I think that FIFA's decision to ban the OneLove armband will be talked about for a while. Do I wish there had been a space for full freedom? The answer is clearly yes," Amelie Oudea Castera told public TV channel Public Senat.

"Are there still spaces of freedom where our French team can continue to express their commitment to human rights? The answer is yes. The Germans are showing it."

"There are still weeks ahead of us in which they can be free to express themselves, to use these spaces of freedom to carry their messages," she said.

"They have these values too. They belong to a country that holds these values high and it is important that they represent them."

Qatar want to prove they can compete at the highest level when they face Senegal, coach Felix Sanchez said on Thursday on the eve of a clash that may thwart their World Cup hopes.

The Asian champions hope to avoid becoming the fourth hosts eliminated in the first round at the finals after Switzerland, Chile and South Africa in 1954, 1962 and 2010 respectively.

Qatar lost 2-0 to Ecuador in the opening game of the tournament after a disappointing performance, causing many fans to leave the stadium 20 minutes before the end.

"Hopefully we can play freely and without pressure and be better than what happened in the first game, this team have a point to prove," Sanchez told a news conference.

"Matches are controlled by many factors, but the most important thing is to give our best, in the World Cup if you don't give your best you will be punished."

The Spanish coach indicated that he did not expect another disappointing performance like that against Ecuador and wanted the team to play with their usual personality and do more.

"Emotionally, things were very difficult and dealing with the World Cup is completely different. I hope that the performance will be as competitive against Senegal," he added.

The results of the Arab teams at the World Cup aroused the jealousy of Qatar's players, said midfielder Ismail Mohamed.

Saudi Arabia stunned the world as they came back from a goal down to beat Argentina, while Tunisia and Morocco snatched goalless draws against Denmark and Croatia respectively.

"Certainly, the results of the Arab teams made us jealous and (want to) give our best, regardless of what happens off the field," Mohamed said.

The Netherlands, who defeated Senegal 2-0, and Ecuador lead Group A with three points before they meet also on Friday.