Roberto Baggio lifting his penalty high and wide against Brazil in the 1994 World Cup final, Chris Waddle nearly booting the ball out of the Stadio delle Alpi in 1990 as England bowed out to West Germany, heck, even Diana Ross causing red faces at the World Cup USA opening ceremony – they all have a man from Armagh to thank for their moment of infamy.

William McCrum was the frustrated Milford FC player who conceived the idea of the penalty after coming to the conclusion that the punishment didn't fit the crime for offences close to goal.

His mood couldn’t have been helped by his side’s performance in the very first instalment of the Irish League. Milford, the only non-Belfast side in the division, lost 14 games from 14 and conceded 62 goals in the process.

McCrum offered his idea of a penalty to Jack Reid of the Irish FA, who in 1890 proposed it as a rule at a meeting of the International Football Association Board, the body that determines the laws of the game of association football.

Resistance emerged as such a rule would call into question the gentlemanly aspect of the sport, but it is believed an incident in the 1890/91 FA Cup quarter-final helped sway opinion.

Eventual finalists Notts County were holding onto a one-goal advantage against Stoke City when County defender Jack Hendry handled the ball in the box. The only available punishment was an indirect free-kick, which they cleared after stacking the line with bodies.

Four months later, and with the referee from the game John Lewis championing it in his position now as a legislator, the penalty was introduced.

There were some key differences to today’s version, with the fouls taking place within 12 yards of the goal-line as there was no penalty box at the time, and it could be taken anywhere along the line with the penalty spot not introduced until 1902.

Still though, McCrum had changed the face of football forever and just four days after being introduced, the world’s first penalty was awarded as James McLuggage – another Irish man - of Royal Albert scored in a 2-0 win over Airdrieonians in Scotland.

So with Qatar just around the corner, it’s no better time to look at how an Irishman has shaped the most famous competition in football.

Irish eyes are smiling and weeping

The success against Romania at Italia 90 needs little introduction, going down as one of Ireland’s greatest ever sporting moments.

Four skips and a hop – Packie Bonner’s celebration after saving from Daniel Timofte was burned into the memory.

Joy turned to trepidation as David O’Leary, the defender who hadn’t featured in the group games and only came on for Steve Staunton in extra-time, strode forward for the crucial fifth kick.

"The nation hold its breath.....yes!" Ireland were through.

Fast-forward 12 years and Ireland were back in shoot-out drama, again at the round of 16 stage, with Spain providing the opposition in the South Korean city of Suwon.

Fernando Morientes headed Spain in front after just three minutes and that looked like it would be enough to send Ireland home before Robbie Keane stroked home a last-gasp penalty after Ian Harte had earlier had one saved. No goals in extra-time meant spot-kicks.

Keane was on target first off before Matt Holland crashed his effort against the bar.

After Rubén Baraja finished confidently, there were an extraordinary four missed penalties in-a-row, David Connolly and Kevin Kilbane the guilty parties for the Boys in Green.

Steve Finnan did convert the fifth to give Ireland a chance, but Gaizka Mendieta rolled his effort down the middle and just agonisingly out of reach of Shay Given’s boot and Ireland were heading home from a tournament that brought the word 'Saipan’ into the public conscious here.

The curse of the English

When it comes to World Cup penalty sob stories, England rarely leave a dry eye in the house.

The Three Lions tend to crumble from 12 yards with a record of three won from 10 in all competitions.

Some of their most famous losses have come at the World Cup, but the silver lining is that some of those responsible for their misses – Stuart Pearce and Chris Waddle – got a Pizza Hut advertising deal out of it. Gareth Southgate did too for his Euro 96 miss against Germany, with the current England manager famously having to wear a bag on his head.

Pearce and Waddle had their moments in 1990 when they failed to convert to hand West Germany a final spot where they would beat Argentina. David Batty was at fault against Argentina in 1998, although David Beckham took some of the heat off him with his kick out at Diego Simeone, while 2006 was a mess against Germany as Frank Lampard, Steven Gerrard and Jamie Carragher all failed to score.

When Jordan Henderson missed against Colombia in 2018 to leave them 3-2 down, it looked like another scapegoat was being prepared, but the crossbar and Jordan Pickford would intervene leaving Eric Dier as the man to score England’s first winning penalty in a World Cup shoot-out.

Curse broken? The shoot-out loss to Italy in the Euro 2020 final against Italy at Wembley would suggest not.

England are not alone in losing three World Cup shoot-outs. Italy exited three tournaments in-a-row via that method, in 1990 against Argentina, 1994 against Brazil and 1998 against France.

Spain, like England and Italy, have lost three from four with Belgium in 1986, South Korea in 2002 – on a day when Spain raged at the officiating about two disallowed goals – and Russia in 2018 dumping them out.

Only one player has ever scored the winning penalty in a shoot-out more than once, and that’s Croatia’s Ivan Rakitić who had the honour twice in the 2018 World Cup in Russia.

First up was the round of 16 clash with Denmark and with the sides level at 2-2 after four penalties each, Nicolai Jørgensen saw his effort stopped by Danijel Subašić allowing Rakitić to calmly roll the winner into the corner.

It was more of the same in the quarter-final against the hosts, with Russia needing him to miss Croatia’s fifth penalty to keep their hopes alive, but another low effort to the ’keeper’s left was good enough to send them through, the country eventually losing to France in the final.

The old stereotype of Germany and penalties certainly rings true in the World Cup with the country winning four from four, three of those when playing as West Germany.

Of the countries to face more than one shoot-out in the World Cup, they are one of only two with a 100% record. Croatia, with two victories in 2018, are the other.

Two countries have also 0% record of the teams facing more than one. Romania lost out in 1990 – no need to say who against – and again four years later as Sweden beat them in the quarter-final with a then youngster by the name of Henrik Larsson’s grabbing Sweden’s last.

Mexico’s first loss came against West Germany in the 1986 quarter-final and, like Romania, they also faced heartache in 1994 as they lost a shoot-out to Bulgaria the day after the Netherlands had dumped out the Republic of Ireland in Orlando.

Germany’s record is impeccable. Their run started, as West Germany, in the 1982 semi-final against France and four years later Mexico were the victims. There was that famous 1990 success against England en-route to the trophy, and then in 2006 they got the better of Argentina with both countries going into the shoot-out having won their three previous penalty contests.

Fabien Barthez has the unwanted distinction of being the goalkeeper to let in the most World Cup penalties – eight. Despite that, he has actually won one of the two he has been involved with.

That was the first, a 1998 quarter-final tie against Italy in front of his home fans. Roberto Baggio, Alessandro Costacurta and Christian Vieri all converted for the Italians but France still progressed with Luigi Di Biagio smacking the crossbar with his crucial kick.

Eight years later, France and Italy would square off once again, but this time in the final in Berlin.

The Italians’ penalties were brilliant, all five scored, meaning that the crossbar – just as it had done in ‘98 - proved decisive with David Trezeguet’s penalty striking the underside and rebounding out allowing Italy to claim glory on a night famed for Zinedine Zidane’s headbutt on Marco Materazzi.

One of the most famous penalties of all didn’t happen during a game, but in the 1994 USA World Cup opening ceremony as Diana Ross missed a shot that would have made Ronnie Rosenthal blush.

Scepticism of America’s relationship with the game ahead of the tournament was high, so a memorable, all-action opening ceremony at Soldier Field in Chicago was deemed vital to kick-start USA 94.

Bill Clinton gave a speech, Oprah Winfrey stumbled and appeared to hurt her ankle and then came the penalty heard around the World Cup.

Singing her hit ‘I’m Coming Out’ and running through a host of bodies, Ross approached the penalty spot, which was a rule breaker in itself as it was nowhere near 12 yards out.

Her technique looked impressive, twice feinting in order to deceive the ‘keeper, but she skied it a yard wide of the right post. To add insult to injury, the goal had been rigged to split in two in anticipation of a thunderbolt down the middle.

So for Diana Ross, she has a man from Milford in Armagh to thank for one of her more memorable moments. Let's see what Qatar can provide on the penalty front. 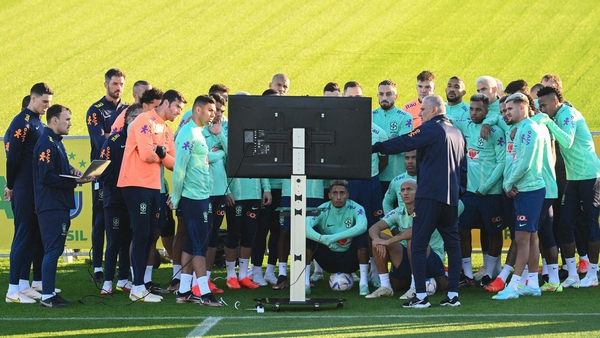 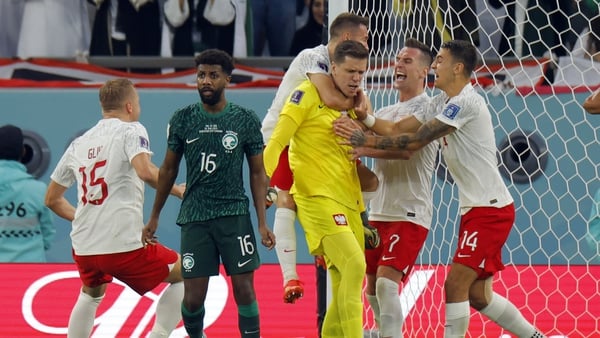 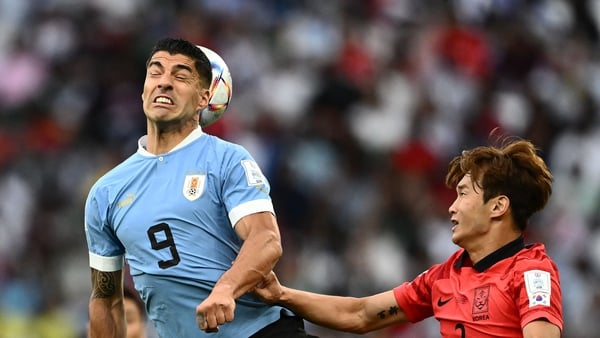 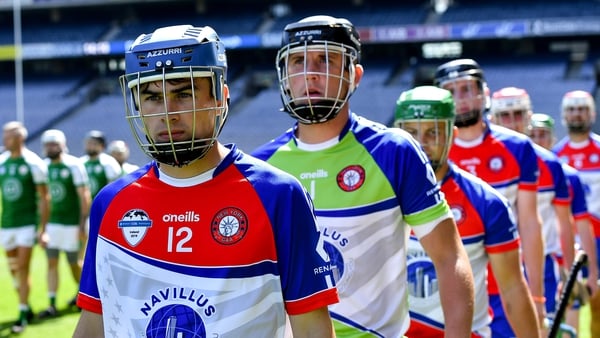 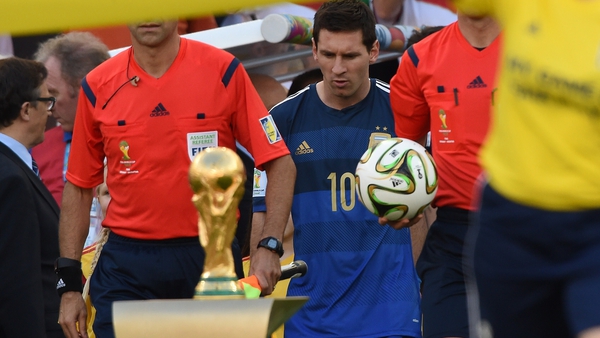