Meath's captain Shauna Ennis says they have been tweaking things in their system ahead of Sunday's All-Ireland TG4 SFC final where they will meet a rampant Kerry forward line.

The Royals shocked Dublin in last year's decider and this year they will be hoping history does not repeat itself when the Division 2 champions, the Kingdom, go in search of their first All-Ireland senior crown in 29 years.

Speaking to RTÉ Sport, Ennis says this Kerry side are on the road Meath were on last year.

She said: "They have taken a very similar path that we took last year.

"You know, they've proved that they're a really talented team, some extremely talented footballers.

"And we definitely we won't be taking them for granted at all."

The defending champions must be wary of Kerry's goal threat which has been evident throughout the championship, according to Ennis

"They are a very goal hungry team. They get a lot of goals.

"They have the likes of Siofra O'Shea and Louise Ní Mhuircheartaigh up there, basically All-Star forwards.

"So we've been working on things, tweaking a few things in our own system to try and stop that.

This year has been a different challenge for Meath as the hunters have become the hunted and the Na Fianna defender is hoping the tough nature of their games this year will stand to her side in the final.

"I suppose as everyone said we sort of went under the radar last year, where as this year, everyone was out to get us and we've had some really really tough games in the lead up to this match.

"I think when teams are going out to play the All-Ireland champions, they're definitely going out and playing their best football, which is what we want as well, you know we love that.

"It's what you play football for. So we are hoping they're gonna stand to us."

Ennis is expecting a big battle in Sunday's final but she is aware Meath will be the favourites.

"I think coming back this year, probably mentally, it was something that a lot of us would have struggled with coming in with that favourites tag.

"But we have an excellent management team around us, we have a really really good psychologist with us as well who and we've done a lot of work with them.

"We've got back here and that was the aim at the start of the year to get back on All-Ireland Sunday and we are here so we're just hoping for a big performance on the day.

Meath are looking to make it back-to-back All-Ireland wins and Ennis will be hoping to make the walk up the steps of the Hogan Stand again to collect the Brendan Martin Cup.

Follow the All-Ireland LGFA final day, including a live blog of the final, Meath v Kerry, on Sunday at 4pm on the RTÉ News app and on rte.ie/sport, plus live radio commentary on RTÉ Radio 1. 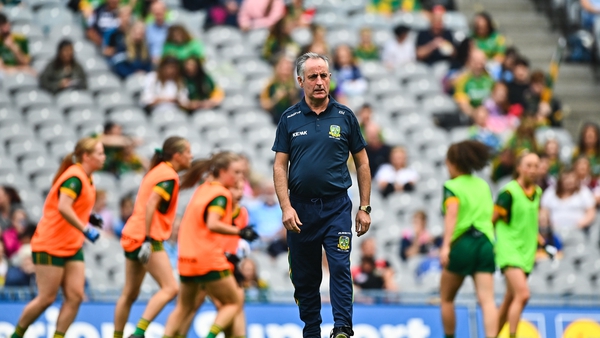