Devonta Freeman scored another three touchdowns as the Atlanta Falcons remained unbeaten in the NFL with a 48-21 win over the Houston Texans.

Freeman, who also recorded a hat-trick of touchdowns last week against the Dallas Cowboys, had scoring runs of 16, 23 and six yards and rushed for 68 yards.

Falcons quarterback Matt Ryan threw for 256 yards, while Texans starting quarterback Ryan Mallett was replaced by back-up Brian Hoyer with the Falcons 42-0 ahead.

The Carolina Panthers are also 4-0 after Cam Newton threw two touchdown passes to Ted Ginn Jr in the 37-23 victory over the Tampa Bay Buccaneers.

But the story of the game was four interceptions of Buccaneers' rookie quarterback Jameis Winson, with Josh Norman picking off the youngster's first pass and returning it for a 46-yard touchdown.

The Cincinnati Bengals also improved to 4-0 as Andy Dalton threw a 55-yard touchdown pass to Brandon Tate on the way to their 36-21 victory over the Kansas City Chiefs.

New York Jets quarterback Ryan Fitzpatrick threw for 218 yards and one score while Chris Ivory rushed for 166 yards and a touchdown in a 27-14 win over the Miami Dolphins in London.

Matt Hasselbeck took the Indianapolis Colts on a 53-yard drive in overtime to set up a 27-yard field goal for Adam Vinatieri that earned them a 16-13 win over Jacksonville Jaguars.

Jay Cutler threw two touchdowns and Robbie Gould landed a 49-yard field goal to give the Chicago Bears a 22-20 victory over the Oakland Raiders, while Rashad Jennings' 51-yard touchdown helped the New York Giants to a 24-10 win over the Buffalo Bills.

Kirk Cousins threw a four-yard touchdown pass to Pierre Garcon with just 26 seconds left on the clock to give the Washington Redskins a 23-20 victory over the Philadelphia Eagles.

The Green Bay Packers and the Denver Broncos maintained their perfect records after four rounds with victories over the San Francisco 49ers and the Minnesota Vikings respectively.

Packers quarterback Aaron Rodgers threw for 224 yards and a touchdown as Green Bay cruised to a 17-3 margin over the 49ers, while Brandon McManus converted a late 39-yard field goal to inch the Broncos to a 23-20 triumph over the Vikings.

The Cleveland Browns are now 1-3 after Josh Lambo's late field goal earned the San Diego Chargers a 30-27 win at the Qualcomm Stadium.

Drew Brees threw the 400th touchdown pass of his NFL career as CJ Spiller ran it in for the New Orleans Saints to topple the Dallas Cowboys 26-20 in overtime, while the St Louis Rams just squeezed home 24-22 winners over the Arizona Cardinals. 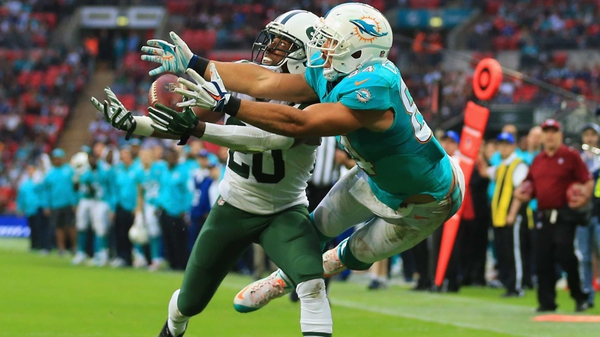