Eddie O'Sullivan believes Leinster will have just enough to beat Ulster in this Saturday's top of the table clash in the BKT United Rugby Championship.

The sides meet at the RDS just over eight weeks on from Leinster's 20-13 win in a tense derby at the Kingspan Stadium, while Ulster previously did the double in last year's derbies, including a 20-10 win at the RDS a year ago.

With Leo Cullen and Dan McFarland having rested their key players in last week's Round 8 wins, it's expected that both sides will be close to full strength on Saturday.

And with the derby serving as a dress-rehearsal for next week's Champions Cup opening weekend, O'Sullivan says he's expecting a full-blooded Interpro at the RDS.

"The context of the Champions Cup next week, you want to go into that off the back of a good result, so whoever loses at the weekend will be going onto the Champions Cup off a loss," the former Ireland coach told the RTÉ Rugby podcast.

"You can see both teams putting their best team on the field, that's the beauty of it. 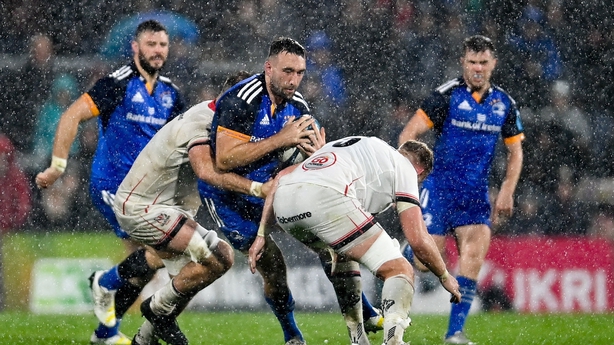 "I remember when I was Irish coach, I used to watch Christmas Interpros through my fingers, because the teams would knock lumps out of each other, and they were all coming into camp the following week as the walking wounded.

"We don't have a lot of those Interpros anymore, but this is one where everyone is on deck, the way it’s timed."

Leinster come into the game with a 100% record from their eight games so far this season, the latest a 40-5 win against the Glasgow Warriors on Saturday.

Ulster are their closest challengers though, with six wins from their seven games, the only defeat being their narrow loss to Leinster in Belfast at the end of September.

"They've definitely closed the gap," said former Ireland international Ian Keatley. "They’ve really developed their game, they’ve a nice, strong driving maul which they score tries off, but they can mix it up go out to their backs and be really creative.

"I don’t think Leinster will be forgetting James Hume’s celebration after he scored that intercept try last year, shrugging his shoulders like it was no big deal about winning in Leinster. There will be a bit of bite from Leinster, and they won’t lie over easily, especially with their internationals coming back.

"It’s leading into an exciting battle, they’ve almost become the two top teams in both Ireland and the whole league."

While Ulster have only lost once this season, they're eight points back from the defending Irish Shield champions, after their Round 6 game against the Sharks in Durban was postponed due to illness in the Ulster camp.

And although Ulster do have a game in hand, O'Sullivan believes the potential of securing a double-digit lead at the top of the table could be the deciding motivation for Leinster.

"I still think Leinster will win the game," O'Sullivan said.

"Leinster got out of Ravenhill by the skin of their teeth earlier this season, they had the game sewn up and let Ulster back into it, and I think they were very lucky to get out of it. But I just think Leinster will get this done.

"I could have egg on my face, but I think in these situations at home, Leinster tend to get the thing done."