The pain of Munster's Heineken Champions Cup quarter-final defeat to Toulouse will make the province stronger in the long run, according to second row Tom Ahern.

Johann van Graan's side return to the Aviva Stadium tomorrow (7.15pm) for the final round of the URC regular season, for what is in all likelihood a must-win game against Leinster if they want to secure a home quarter-final.

It will also be their first outing since the Champions Cup defeat to Toulouse at the same venue just under a fortnight ago, when they were agonisingly beaten in a place-kicking competition after a 24-24 draw over 100 minutes.

With no game last week, the Munster head coach said that they have been able to get that disappointment out of their system, and with their focus now firmly on the URC playoffs, Ahern believes the pain of defeat has only brought the squad closer together.

"In some of the photos after the game you can see all of us consoling each other, there was one nice group shot of us all close together and this group, especially, is all so tight, we get on so well with each other," he said.

"Obviously it was bizarre circumstances for that game and I think all the group was bitterly disappointed because we went toe to toe for 100 minutes and it was a tough way to lose a game.

"But we came in last week for one day, just to review the game and put it behind us and got some nice time off so we could just refresh our minds and I think we're all looking forward and refocusing for a big game up in the Aviva on Saturday."

The Waterford lock had to endure some frustrating times this season, when a combination of Covid-19 and a thigh injury limited him to just four appearances between October and April.

But since returning in the earlier derby defeat to Leinster in April, the 22-year-old has featured in each of the last six games, making a significant impact in almost every one of those appearances.

The 6ft 9in second row had been earmarked as a real prospect since playing for Ireland U20 in 2019 and 2020, with incredible pace for a player of his size. 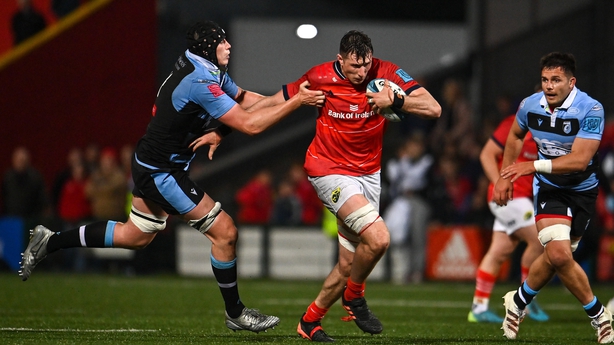 But this season he's looked more comfortable with the nitty-gritty stuff, and has developed his lineout game even further, with a particular moment against Toulouse standing out, Ahern stealing a crucial lineout in his own 22 in extra-time.

"I was lucky enough last year, I had Billy Holland who's a good man to help me out with lineouts last year and couple of lads this year now, Tadhg Beirne and Fineen Wycherley.

"We're all very close together and we’re always bouncing ideas off each other and helping each other with that aspect of the game."

"It’s definitely a big work-on for me at the moment. Graham Rowntree has been a massive help with that as regards my game, that kind of tight work around my scrum, my mauling, my rucking and stuff like that. It’s been a big focus for me and my improvement."

Having made his Munster debut in 2020, Ahern is part of that new generation whose early experiences of rugby were played behind close doors, a stark contrast to the 40,000 baying fans he played in front of a couple of weeks ago at the Aviva.

"It was probably easier alright because there were no outside distractions, especially for me in the lineout anyway it was easier to hear calls and stuff like that.

"It was a bit of a weird experience, all right, all those games."

But while it was a gentle introduction to the demands of senior rugby, nothing could have prepared him for the big European days against Exeter and Toulouse.

"To be honest, it's unbelievable," he added of the atmosphere in those games.

"It's something like as a child growing up going to European matches in Thomond Park and enjoying the atmosphere, but when you're on the pitch it's almost completely surreal.

"Like, in the Aviva, in that extra time period, when they started singing that song it was almost like an out of body experience. It was unbelievable." 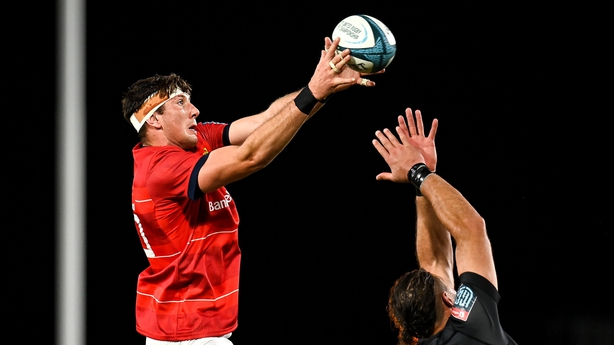 It will be a different kind of Aviva Stadium this week though, with the stands likely to look more blue than red with Leinster being the home side.

A win for Munster will guarantee a home quarter final, and likely a home semi-final if they advance to the last four.

But having been beaten 34-19 when the sides met just seven weeks ago, Ahern knows they have to make improvements.

"We can only control what we can control. We've got to turn up, put our best foot forward and put in a performance.

"I'm not going to say we can change much. The last time in Thomond Park, we did give up a lot of mistakes and gave them some easy access into the game.

"But if we just look after our own performance this week I think we'll nail them.

"They’re the URC champs and they’re the European finalists so you know what you get with them. They brought a different kind of squad down to South Africa and you see the two performances and they almost came away with two wins with a different squad.

"So we’re under no illusions that whatever squad they put out, it’s going to be a big battle up there."