Connacht centre Tom Daly has been banned for his side's Heineken Champions Cup last-16 first leg with Leinster next week, following his red card against the same side on Saturday.

However, he could be available for the second leg at the Aviva Stadium, if he completes a World Rugby Coaching Intervention Programme.

Daly was suspended for two weeks after being red-carded just two minutes into Saturday's 45-8 defeat to the leaders, after his high tackle made contact with the head of his opposite number Ciarán Frawley.

The 28-year-old was initially given a six-week ban, which was reduced by 50% due to his clean disciplinary record.

And while the resulting three-game ban would see him suspended for this weekend's URC visit to Benetton, as well as both Champions Cup games against Leinster, the final game of the ban will be quashed if he signs up for the World Rugby Coaching Intervention Programme.

"The Judicial Officer overseeing the disciplinary process, Declan Goodwin (Wales) determined that the Player's actions met the threshold of a Red Card and that the act of foul play warranted a sanction," a URC statement reads.

"Mr Goodwin determined the entry point be mid-range which carried a suspension of six (6) weeks. However, considering the Player accepted that the act of foul play warranted a Red Card, has a clean previous record, made an on-field apology to Ciarán Frawley (Leinster No.12) and the match officials and his exemplary behaviour during the process these considerations entitled him to full (50 per cent) mitigation." 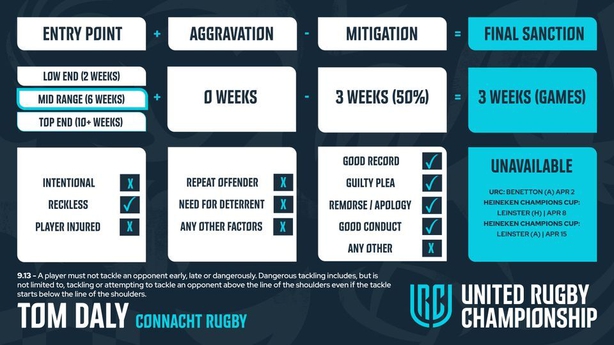 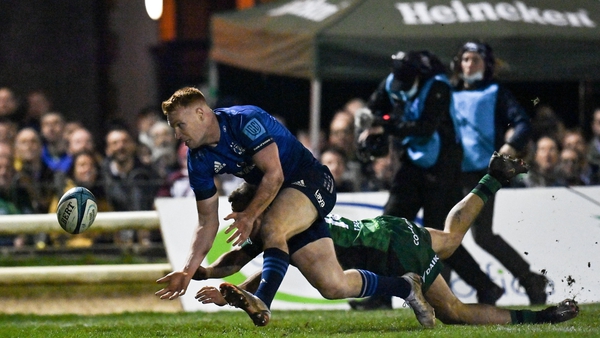