Robert Baloucoune, Mike Lowry and Nick Timoney have all been released from Ireland camp to play for Ulster in the United Rugby Championship this week.

Dan McFarland's side host Connacht tomorrow night at Kingspan Stadium, with Baloucoune and Lowry both brought straight into the starting team for the Interpro, while Timoney is among the replacements.

In further good news for the northern province, Stuart McCloskey returns to the centre, having missed the last six weeks with a hamstring injury.

McCloskey partners Angus Curtis in the second row while Ethan McIlroy continues on the left wing, with Billy Burns and Nathan Doak behind the scrum.

With Marty Moore and Tom O'Toole both unavailable, Gareth Milasinovich makes his first start of the season at tighthead alongside Andrew Warwick and John Andrew in the front row, while Sam Carter continues to partner captain Alan O'Connor at lock.

Springbok Duane Vermeulen packs down at number eight, with Marcus Rea and Greg Jones on the flanks.

The province are also set to hand a debut to hooker Declan Moore who recently joined on loan from Munster, ahead of his permanent move north this summer, with the 25-year-old among the replacements.

Connacht have made 11 changes from the side that were beaten heavily by Glasgow last week, with Tom Daly making his return from injury in the centre.

The Ireland international hasn't played since suffering a knee injury in their 36-11 win in this fixture in October.

Daly takes the place of the injured Tom Farrell in the centre, while John Porch and Peter Sullivan start in the back three ahead of Tiernan O'Halloran and Diarmuid Kilgallen, with Alex Wootton switching to the left wing.

Seven of the eight changes come in the pack, with just captain Jarrad Butler continuing from last week's defeat.

Denis Buckley makes his first start since recovering from ACL surgery and joins Tietie Tuimauga in the front row, with Niall Murray and Oisin Dowling at lock.

Cian Prendergast returns from IRFU camp to join Butler and Conor Oliver in what has been Connacht's first choice back row this season. 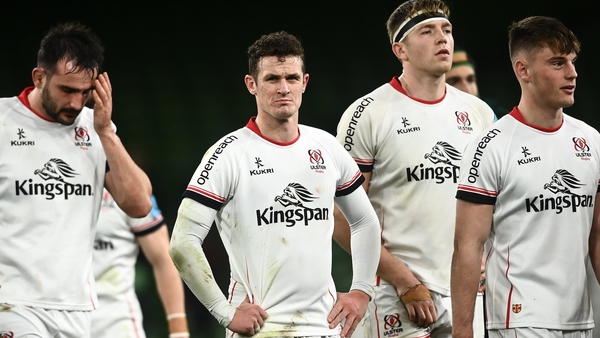