Ulster's 20-10 victory at Leinster last weekend pulled them level on points with the defending champions at the summit while Edinburgh triumphed 30-14 at the Dragons to reduce the gap on the leading duo to a single point.

Leinster host a rejuvenated Connacht at the RDS Arena tonight.

Ulster’s quest to stay among the competition’s pace setters takes them to Swansea to face the Ospreys on Saturday while Glasgow Warriors meet the Dragons at home later that evening.

Munster, of course, are not in action after their cancelled tour of South Africa.

Partly cloudy in around 7C for the match at the RDS this evening, while Swansea expects light rain showers with a similar temperature tomorrow afternoon for the visit of Ulster. 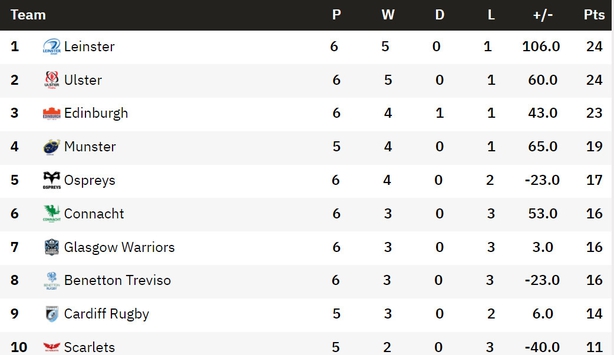 Defeat to Ulster in Round 6 ended Leinster's six-game winning run but they have never lost successive matches at the RDS Arena.

Connacht will arrive in confident mood following back-to-back bonus-point victories over Ulster and the Ospreys, although their most recent away win came back in May – at Munster in the Rainbow Cup.

The visitors will look to draw on their most recent experience of playing at the RDS in January when they emerged as 35-24 victors – their first win on Leinster soil since September 2002.

Leo Cullen has recalled a number of Ireland stars to his line-up, while Andy Friend makes three changes.

Ulster have been good travellers of late and head to Swansea having won three of their last four away matches.

Dan McFarland's side have an excellent record against Welsh opposition and have won their last six matches against the regions since a 26-24 defeat to the Ospreys in February 2020.

The Ospreys have won only two of their last nine home encounters against Irish provinces in all competitions, although one of those came in their most recent outing at the Swansea.com Stadium – an 18-10 win against Munster.

Craig Gilroy is set to become the eighth Ulster man to make 200 appearances for the province if called upon on Saturday, as he is named among the replacements in the match-day squad.

Jack McGrath makes his return to the Ulster side after recovering from injury and is named among the replacements.

Mike Lowry has been selected at full-back, with Ethan McIlroy on the left wing and Robert Baloucoune on the right. Stuart McCloskey and Angus Curtis will form the midfield pairing. John Cooney and Billy Burns have been named scrum-half and out-half respectively.

Brad Roberts will come in to start at hooker, with Eric O'Sullivan and Tom O’Toole either side of him in the front row. Alan O’Connor will captain the team and is named in the second row with Kieran Treadwell. Sean Reidy comes in to start at blindside, with Nick Timoney at openside and David McCann completing the base of the pack.

RTÉ Rugby podcast: Munster preparation up in the air and Kelleher on his golf handicap