Fabio Fognini saved a match point as he edged out compatriot Salvatore Caruso in a bad tempered five-setter at the Australian Open.

Caruso, clearly antagonised by the 16th seed's antics during the match, exchanged what couldn't be described as pleasantries with Fognini as he left the court, with the umpire forced to come between the two men.

Alex de Minaur lies in wait for the 33-year-old in the third round.

Rafael Nadal seemed to be in full working order as he brushed aside Michael Mmoh .

The second seed was not troubled by the back problem which hindered his build-up in a 6-1 6-4 6-2 victory in an hour and 47 minutes against the American qualifier.

In fact his biggest inconvenience was a raucous spectator - who may have enjoyed a little too much of the Melbourne hospitality - delaying proceedings until she was escorted out by security.

Asked if he knew the woman, Nadal said on court: "No, and honestly I don't want to know!"

He later expanded on the incident, quipping: "Maybe she took too much gin or tequila. I don't know. But honestly it was strange situation, but, yeah, funny at the same time.

"Somebody doing the finger to me – I don’t know the reason. I was surprised, yes, but at the same time was thinking, 'poor girl’. Because probably she was drunk or something like this. I don’t know."

On his back trouble, Nadal, who faces Britain’s Cameron Norrie in round three, added: "No, it’s not under control. I just keep fighting to find a solution." 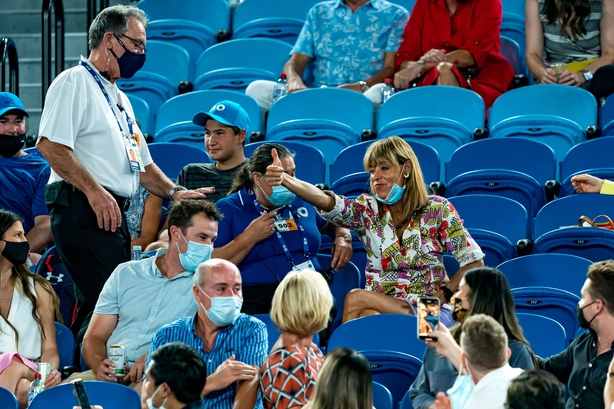 Thanasi Kokkinakis came up just short of another memorable victory after his comeback was ended in five sets by Stefanos Tsitsipas.

Kokkinakis' emotional opening-round win over South Korea's Kwon Soon-woo on Tuesday night was his first victory in Melbourne since 2015, following a series of injuries and illnesses that threatened to destroy his career.

The Australians have been providing the high drama at their home grand slam, an event otherwise relatively low on thrills, low on crowds, and with players low on fitness following quarantine.

Nick Kyrgios got the party started on Wednesday night with his rollercoaster five-set win over Ugo Humbert and he was in the stands to support his good friend and doubles partner Kokkinakis.

The 24-year-old wild card took the first set against world number six Tsitsipas after a tie-break and, like Kyrgios 24 hours earlier, saved a match point in the fourth.

Elsewhere in the men's draw Russian seventh seed Andrey Rublev reached the third round with a straight-sets win over Thiago Monteiro.