Novak Djokovic flew out of the traps at the ATP Finals but Roger Federer's return to London fell flat.

Djokovic, jostling with Rafael Nadal to finish the year as world number one, swept aside O2 debutant Matteo Berrettini 6-2 6-1 in a shade over an hour.

Federer would have expected a tougher test against Dominic Thiem in the evening session, and so it proved. The six-time champion was beaten in straight sets, 7-5 7-5.

Federer said: "I thought the match was actually pretty even for a long period of time. I had my chances, I felt. I didn't feel like I was outplayed or anything. Just maybe that first-round hiccup.

"It's a normal tournament from here on forward. I'm not allowed to lose anymore. That's how it is every week of the year for the last 20 years, so from that standpoint there is nothing new there."

Austrian Thiem, who has five titles to his name this year, now holds a 5-2 win record over Federer.

The 26-year-old, who dumped his first match point into the net but converted at the second attempt, said: "It was a great performance, my first opening win here at the Finals.

"We had a good and close match, and it's always special to beat Roger. You don't get any presents from him. I'm very happy that I pulled through the last game." 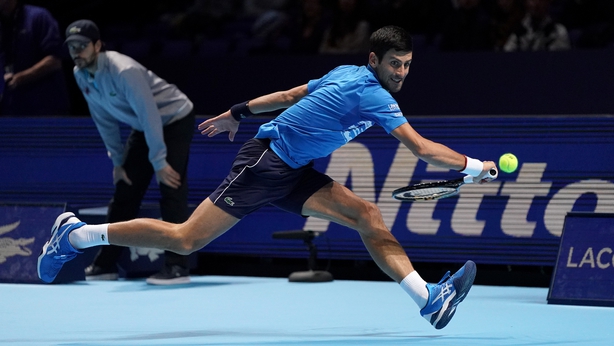 It means Federer's group stage meeting with Djokovic, their first since July's Wimbledon final, will take place on Thursday.

The 38-year-old Swiss will probably need to avenge that five-set defeat at SW19 if he is to reach the semi-finals.

The crowd were firmly on Federer's side that day, and Djokovic is likely to face more of the same on the banks of the Thames.

"I understand why there is so much support for Roger, he is who he is, and what he has achieved and the personality that he is, he deserves that," said Djokovic.

"Sometimes the crowd is on your side, sometimes it's against you. It's something throughout my career I've had to learn how to handle, how to accept, and how to deal with that.

"It will not be anything particularly different in terms of my reaction if that happens. I'm going to accept it and respect it, and that's it. I'm going to try to focus on what needs to be done in order to win a tennis match."

As for whether Federer's mindset would be affected by that gut-wrenching defeat in July, Djokovic said: "Maybe, maybe not. I don't know. But I will not expect that."

Djokovic needs to at least reach the final of the season-ending tournament to stand a chance of overhauling Nadal, and thus equalling Pete Sampras' record of ending the year on top of the rankings six times.

The 32-year-old Serbian certainly looks like he will take some stopping in London, reeling off eight games in a row on his way to dismantling eighth-ranked Italian Berrettini.

Nadal, who has fitness concerns due to an abdominal problem, faces defending champion Alexander Zverev on Monday evening.