Nick Kyrgios, one of the most combustible characters in tennis who was recently fined a six-figure sum over a meltdown in Cincinnati, could be in more trouble for describing the ATP as corrupt after his opening match at the US Open.

The Australian, famous for his outbursts on and off the court, managed to keep reasonably calm as he beat American Steve Johnson 6-3 7-6(1) 6-4 in his first round clash on Tuesday.

But, in the post-match news conference, the mercurial 24-year-old caused another stir after being asked about the $113,000 fine which followed his second-round defeat by Russia's Karen Khachanov at the Cincinnati Masters earlier this month.

Kyrgios was asked if the fine - imposed for unsportsmanlike conduct, verbal abuse and audible obscenity after arguing with Irish chair umpire Fergus Murphy and smashing two rackets - had affected him.

"Not at all. The ATP is pretty corrupt anyway, so I'm not fussed about it at all," said Kyrgios, who at Wimbledon visited a pub on the eve of his third round defeat by Rafa Nadal. "I got fined 113K for what?

"Why are we talking about something that happened three weeks ago when I just chopped up someone first round," he added.

Kyrgios posted a statement on Twitter on Wednesday clarifying his remarks, saying corrupt was "not the correct choice of words.

"My point and intention was to address what I see as double standards rather than corruption," he wrote.

"I know my behaviour at times has been controversial and that has landed me in trouble, which at times is granted and valid, but my issue is around others whether gaining the same, less or more media attention doing the same or similar behaviour and not being sanctioned.

"That's my issue and it continues to be." 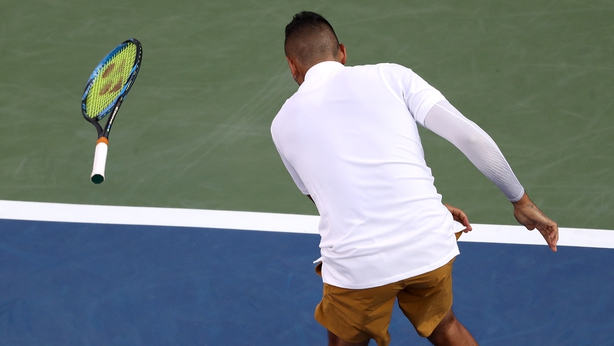 The ATP said in a statement that "the comments made by Nick Kyrgios after his first-round match in New York will be assessed under the Player Major Offense provision under ATP Rules."

It added that an investigation would take place and "a determination" would be made by Gayle David Bradshaw, the ATP's Executive Vice President, Rules & Competition.

Kyrgios' agent John Morris and an ATP official tried to intervene at Tuesday's news conference as the Australian asked the reporter if he had ever sworn at someone.

"You are also not an elite athlete. Just answer my question. Have you ever sworn at someone before?" he said.

Another journalist asked Kyrgios if he was suggesting that elite athletes were allowed to swear at people, to which he responded: "No. I am just saying people get frustrated. It happens."

The ATP said earlier this month that it would see if more action, including an "additional fine and/or suspension" was warranted after the Cincinnati incident.

Kyrgios, the 28th seed, arrived at Flushing Meadows amid questions about whether he could ever mature in time to fulfil his vast potential.

In May, Kyrgios was expelled from the Italian Open after he slammed his racket into the ground, kicked a water bottle and tossed a chair towards the centre of the court before walking out. He also branded Nadal a "sore loser",

Umpires and line judges have not been his only target.

In 2016, he pulled out of the Rio Olympics, saying "unfair and unjust treatment" at the hands of his country's Olympic Committee had solidified his decision and he has had a testy relationship with his country's Davis Cup team.