World number one Roger Federer will meet Chile's Fernando Gonzalez in the final of the Madrid Masters after the two players notched up emphatic victories in their respective matches today.

The 25-year-old Federer overwhelmed Argentine David Nalbandian 6-4 6-0 with his customary brand of precision tennis to reach his 14th final of the year and notch up his seventh win in the last eight meetings between the two players.

Tenth seed Gonzalez reached his first Masters Series final when he romped to a 6-3 6-1 victory over Tomas Berdych who was unable to cope with the hostile home crowd.

The Czech number one folded under the pressure, while Gonzalez gave him no respite as he pounded him with his pin-point serve and wrapped up victory in 52 minutes.

'I've never seen anything like it, it's like a (bad) dream. It's not a tennis crowd,' Berdych said.

Gonzalez admitted the crowd's behaviour had worked in his favour, but said he was delighted with his performance.

'I think it's really tough to go in and get that sort of reception from a crowd of 10,000 people,' he said. 'I was lucky the crowd were with me. I played an unbelievable match.'

The only tournament this year in which Federer has failed to make the final was the Masters Series event in Cincinnati in August when he lost to British number one Andy Murray in the second round.

'I was really pleased with the way I played,' said the Swiss. 'I was aggressive and he was the best returner I played all week.

'The second set was phenomenal especially at the end when I started to hit freely and take my chances. It's a great feeling. There were more and more good shots coming from my end and it was great fun for me.

'It was nice to make the fans feel as though they are living through something special.'

World number four Nalbandian looked jaded after two tough three-set matches on his way to the semi-finals and was never able to match the top seed who wrapped up victory in under an hour to take his winning streak to 18 matches.

Federer, bidding for a 10th title of the season, issued an early statement of intent by winning the opening service game to love, while Nalbandian looked sluggish after his tough path to the semi-finals and lost his serve in the fourth.

In the second set the Swiss refused to let Nalbandian off the hook and rattled through the games in just 21 minutes to chalk up one of his most emphatic victories over the player who beat him in the final of last year's Masters Cup.

Berdych beat defending champion and local hero Rafael Nadal in the quarters, provoking the anger of the world number two and local fans when he put his finger to his lips to silence a raucous home crowd after he won the match.

The crowd vented their anger more once when the Czech walked on to court on Saturday, jeering his every move, whistling as he began serving and cheering when he opened with a double fault.

The 21-year-old was clearly rattled and dropped his serve in the opening game, while Gonzalez grew in confidence as he enjoyed the support from the crowd, breaking again in the ninth to take the first set.

Gonzalez, who had beaten the Czech on their previous two meetings, kept him on the rack in the second to storm to an easy victory. 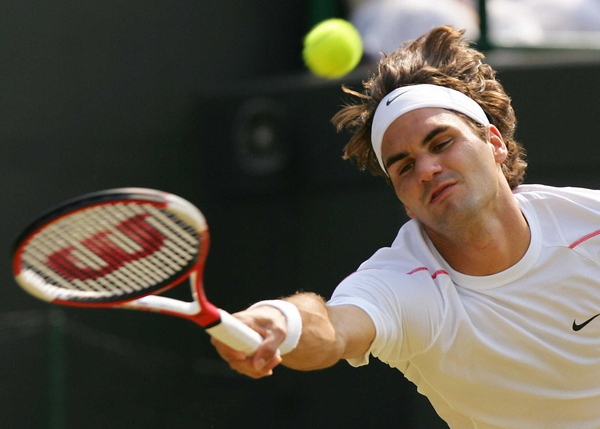 Berdych through to ATP semi-finals