Mona McSharry qualified for a third final of the week on the penultimate day of the European Aquatics Championships in Rome.

She was back in the pool nine hours later and improved that time to 30.90, just .03 off her own Irish record and enough for seventh and a spot in the final tomorrow evening (5.05pm Irish time).

Previous world record holder in the event Ruta Meilutyte of Lithuania swam 29.44 while the current record holder Benedetta Pilato (29.30) of Italy will be the second seed for the final in 29.85.

"That was kind of more the wildcard event for me so it's nice to be able to make it back and race again," McSharry told RTÉ Sport.

"It has been a while [since she competed in the 50m] because it's not an Olympic event.

"Hopefully I'll go faster tomorrow. I just want to swim another good race. A PB would be a nice way to finish the meet."

Niamh Coyne was due to compete alongside McSharry in this morning's heats but did not take her place at the starting blocks. 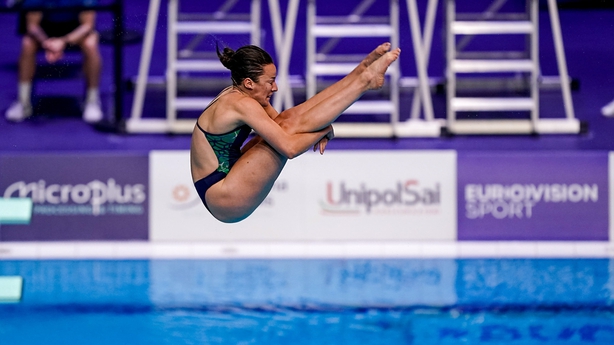 This morning, Cryan had a composed round of five dives to qualify for the afternoon's final, scoring consistently across the rounds with her best score, 50.40, coming in her opening Inward 1 ½ somersaults, to progress eighth overall with 230.40 points.

She finished with a score of 227.75 in the final, and will be back in action on Friday for the 3M Springboard.

'It was a really nice competition, I was steady through it all... It was very nice to make the final' - Clare Cryan speaks to @DarrenFrehill after finishing 11th in the final of the 1M Springboard #Munich2022 pic.twitter.com/MZbbEekYqk

"It was a really nice competition, I was steady through it all," she told RTÉ Sport. "There were no dramas, but I didn't really quite hit anything as good as I could have."

Italy topped the podium with gold and bronze from Elena Bertocchi (264.25) and Chiara Pellacani (259.05) while Sweden's Emma Gullstrand claimed silver with 259.65 points.

Shane Ryan and Max McCusker made their respective exits in the heats of the men's 50m freestyle.

Ryan won his heat in a time of 23.08, but it was the slowest winning time of the eight heats and placed him 50th overall, with only the top 16 advancing to the semi-finals. He is the second reserve for the final.

McCusker’s PB of 23.58 was 1.99 off the time of the fastest qualifier, Thom de Boer of the Netherlands, and good enough for 62nd position overall. 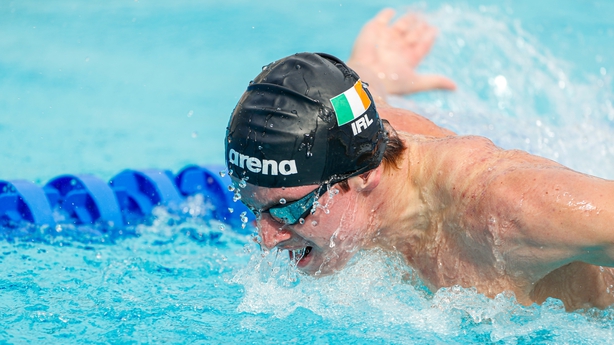 The Irish pair were beside each other in the far lanes in the third and final heat, with the top 16 moving into this evening’s semi-finals.

Corby’s pedigree in the breaststroke was evident when he powered up the standings – he posted the fastest breaststroke leg in the race – to finish with a time of 2:05.78 in seventh place.

That was only good enough for 18th overall.

Custer finished the heat one place adrift of his compatriot Corby in a time of 2:06.66 and 22nd overall.

Tomorrow, the final day of swimming takes place with Grace Hodgins, Finn McGeever and Liam Custer all swimming the 400m freestyle. In diving, Ciara McGing and Tanya Watson take to the boards for the 10M platform preliminaries.