Diego Maradona has criticised the "FIFA mafia" following the decision by the game's global governing body to impose a four-month ban from all football on Luis Suarez for biting an opponent during the World Cup.

Maradona, who was given a 15-month ban from football during the 1994 World Cup for testing positive for the banned stimulant ephedrine, declared his unconditional support for the controversial Uruguayan on his television show 'De Zurda' on Thursday.

Suarez bit defender Giorgio Chiellini during Uruguay's 1-0 win over Italy on Tuesday. The Uruguayan federation (AUF) is preparing an appeal against the punishment, which also bars him from playing in his country's next nine competitive internationals.

"The FIFA sanction is shameful, they have no sensitivity towards the fans, they might as well handcuff him and throw him in Guantanamo," said Maradona, who during the programme wore a T-shirt bearing the message 'Luis, we are with you'.

"The sanction on Luis is a way of punishing Uruguayan clubs for asking CONMEBOL (the South American confederation) for a fairer share of money.

"It hurts that they have cut short the career of a lad who is a winner. It's an excessive suspension, FIFA cannot talk about morals to anyone."

The former Barcelona, Napoli and Boca Juniors forward added: "Suarez didn't kill anyone. This is an unjust punishment, the act of an incredible mafia."

"This is the most indignant punishment"

Maradona also spoke to Uruguay's president Jose Mujica, who was waiting for Suarez at Montevideo airport, via video link.

Egged on by the former Argentina forward, Mujica suggested FIFA was punishing Suarez for reasons other than the aggression against Chiellini, which is the third time in his career he has bitten an opponent.

"We feel that this is an assault on the poor because this gang will never forgive him because he never went to university, he isn't educated, he grew up on the field, and he is a natural rebel and expresses his anger naturally," said the president.

Maradona added in agreement: "In this World Cup there have been much greater incidents than Suarez's (bite) on Chiellini."

Mujica responded: "There's no doubt about that, because we have seen all the games and this is a different punishment. This is the most indignant punishment.

"Here they add everything together but the boy really shouldn't be blamed for his reaction.

"It's a match and these things happen and then there's no need to look into every incident, because if we did that in every game we'd be playing five-a-side." 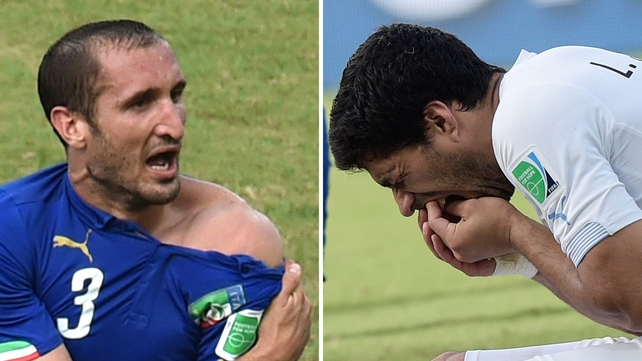 Meanwhile, Chiellini has said the ban is “excessive” and that he feels no anger towards the striker.

"Now inside me there's no feelings of joy, revenge or anger against Suarez for an incident that happened on the pitch and that's done," Juventus centre-back Chiellini said in a statement on his website.

"There only remains the anger and the disappointment about the match.

"At the moment my only thought is for Luis and his family, because they will face a very difficult period.

"I have always considered unequivocal the disciplinary interventions by the competent bodies, but at the same time I believe that the proposed formula is excessive.

"I sincerely hope that he will be allowed, at least, to stay close to his team-mates during the games because such a ban is really alienating for a player."

Meanwhile, the international players' union FIFPro has questioned why Liverpool should be affected by Luis Suarez's four-month ban from all football for biting an opponent.

FIFPro has called for FIFA to address that issue and said that the sanction on the striker should have included "serious treatment" to help Suarez deal with his problem - his attack on Italy's Giorgio Chiellini was the third time in four years that he has bitten an opponent.

The union said Suarez's 'right to work' was also being infringed.
Suarez and the Uruguay FA are appealing against the sanctions, which include a nine-match international suspension.

FIPro said in a statement: "This is a very serious matter, as reflected by the sanctions imposed by FIFA's disciplinary committee.

"The sanction will be reviewed and FIFA will have to focus especially on the accumulation of sanctions including a four-month ban from all football activity.

"The fact that Suarez is prohibited from working for a long period must be addressed as it directly infringes his right to work. Also the fact that Liverpool FC is affected needs to be an important issue.

"Luis Suarez should receive all the support he needs to deal with any off-field issues he may be experiencing at this time. This means that the focus should be on the rehabilitation and serious treatment of the player.

"FIFPro believes that treatment must be a part of any sanction.
"Luis Suarez deserves all the support he needs including legal support in the appeal case in order to achieve a reduction of the sanctions."