Arguably the most intriguing match during the final days of the group stages sees Jurgen Klinsmann's United States take on his home country Germany in Recife, knowing a draw would see both sides progress to the knockout stages at the expense of Portugal and Ghana.

Klinsmann, who played more than 100 times for his country and managed Germany during the 2006 World Cup, insists both teams will be going into the match wanting the three points needed to top Group G instead of a mutually beneficial point.

The close friendship between the two coaches - Germany boss Joachim Low was Klinsmann's assistant during 2006's tournament - will be put to one side for their second meeting in 17 months after the Americans won a seven-goal thriller last January.

Long-range wizards
With Germany's array of talented attackers having rattled in six goals in the opening 180 minutes the USA will have to be on their guard against the likes of Mario Gotze and Mesut Ozil, especially from long range. A fifth of the goals conceded by Klinsmann's side en route to Brazil were scored from distance while Germany racked up 17 per cent of their goals thanks to shots from outside the area - one of the highest totals among Brazil-bound teams.

Age-old problem
The Americans head into this clash shell-shocked by Silvestre Varela's equaliser deep into injury time which saw Portugal salvage a 2-2 draw and they will hope their ageing legs can go the distance this time. Only the Portuguese and Iran have included more players over 30 while the German squad has the fifth-lowest average age, just 26.2 years, so it could well be Germany's fresh legs that make the difference.

German pass masters
Considering the embarrassment of riches in terms of quality in the German camp, it is probably not surprising to hear that Joachim Low's side have played more passes per match, on average, than any other team at the finals so far. In absolute contrast, USA are in the lower echelons in terms of allowing the opposition the ball - only three other countries have a worse record of average passes against (477). It has not hindered the Americans too much though, as they gained four points from their first two matches. Much will depend on their ability to hit Germany on the counter.

Summary
Germany's draw with Ghana will have encouraged the States, who saw off the Ghanaians in their opening match. But despite promises from both coaches you cannot help but feel this match will see both sides celebrating at the final whistle. 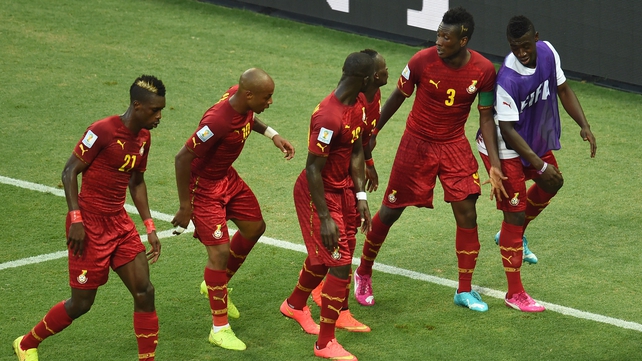 Portugal and Ghana will have one eye elsewhere when they meet in Brasilia for their crucial final game of Group G, knowing a win here does not necessarily result in qualification for the knockout stages. Should Jurgen Klinsmann's USA and Germany play out a draw 2000km north in Recife, victory for either nation would prove inconsequential and bring the curtain down on any hopes of at least matching their achievements in South Africa last time out.

Going to the wire
En route to the finals, both Portugal and Ghana had impressive records of netting late on, scoring on average almost 40% of all goals between them in the final 15 minutes of games, a stat bettered by few nations appearing in Brazil. Portugal have picked up where they left off too - Silvestre Varela's injury-time leveller against USA last time out kept them in the competition - while Ghana's ability to finish games strongly is also there to see. Andre Ayew's 82nd minute strike against the Americans in the group opener looked like rescuing a point for the Africans before John Brooks ruined the party just four minutes later. Keep an eye on this one right until the final whistle.

Goals, Goals, Goals
Prior to the final round of group matches, only Spain (seven) had conceded more goals than Portugal in Brazil. The 2006 semi-finalists' record in qualifying wasn't much better either, conceding 11 times in 12 matches against the likes of Luxembourg, Northern Ireland and Azerbaijan. Ghana have also shown a deficiency in keeping the ball out of their own net at the finals. Both USA and Germany notched twice against the Black Stars in their opening two group games suggesting this final encounter may be an open affair.

Different continents, different styles
Only four sides have played a greater amount of passes into space than Ghana (2.9%), highlighting the direct style of play that James Appiah's side likes to adopt. In contrast, Portugal have hit the smallest share (just 0.7%) which is significantly lower than second-placed Honduras' 1.4%. Clearly Paulo Bento prefers his team to adopt a far more patient approach but, given their lack of success so far, a differing style of play may be needed to match the powerful Black Stars.

Summary
Put simply, this is a must-win clash for Portugal and Ghana. And, bearing in mind both nations' aforementioned tendency to ship goals, it promises to be an engrossing encounter - the overall outcome of which largely depends on events hundreds of miles away. With minor concerns lingering over Cristiano Ronaldo's fitness, Portugal's hopes of securing an all-important three points, while overturning a significant deficit in the goals against column, lie heavily on his participation. Ghana will be buoyed by news that experienced defender Bruno Alves is a doubt, while Fabio Coentrao has been ruled out with a hamstring injury, and will be confident of breaching an already shaky Portuguese defence as they look to qualify for the knockout stages for a second successive World Cup finals. 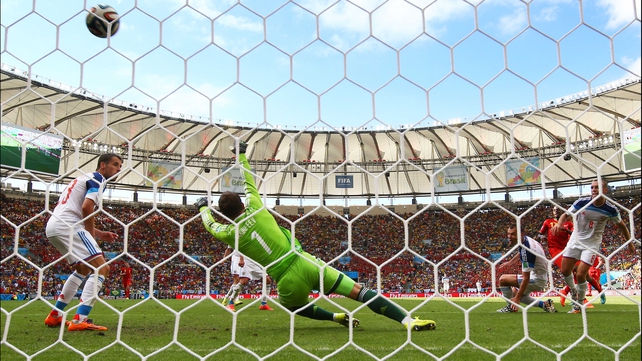 Fabio Capello's side will definitely need more than a draw if they are to join Belgium in qualifying out of Group H. Russia require a victory and to hope the Belgians can do them a favour and see off South Korea, while Algeria know three points should be enough unless the Koreans pull off a shock result.

Say goodbye to the six-goal thriller
Capello has certainly made the Russians extremely organised and well-drilled and they are unlikely to change that approach. The only times they have conceded in this tournament have been Igor Akinfeev's howler against South Korea and an 88th-minute winner from Belgium - no surprise considering they kept clean sheets in half their qualifying matches.

While the Russians bounced back to level against the Koreans that was certainly a rare show of spirit from Capello's men. Russia failed to take a single point from losing positions en route to this tournament so an Algerian opener could see the Russians heading home.

Good things come to those who wait
Do not expect early goals in this clash. None of the six goals these sides have conceded during this tournament so far have arrived before the 50th minute and none of the six scored have come in the opening 25. Those statistics, coupled with the fact that Algeria kept clean sheets during the first 15 minutes of every qualifying match, suggests we are in for a cagey opening to the game.

Clinical Algeria
Perhaps surprisingly, Algeria have been the most clinical in front of goal of any nation so far at the finals. The Africans have scored five times so far despite only attempting 15 shots in total - a conversion rate of 33.3 per cent, significantly higher than the tournament average of 13 per cent. Such clinical finishing may be required though as Russia have allowed an average of 8.5 shots a game on their own goal - one of the best records at the tournament.

Summary
With Algeria on the crest of a wave following their 4-2 win over South Korea, they will hope the first goal is enough to edge out a disciplined Russian side and make history. Just don't expect a first half to remember or a repeat of the six-goal thriller we enjoyed on Sunday. 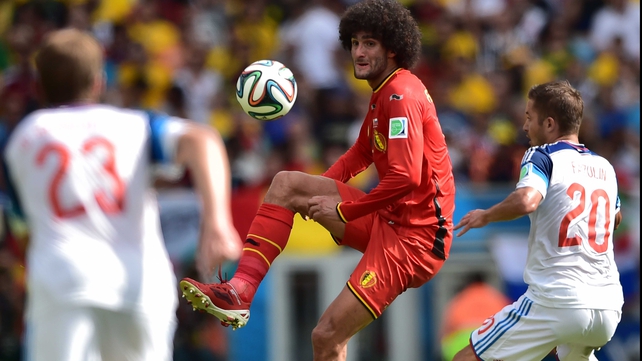 The Taeguk Warriors' two previous outings have only yielded a single point, with a 1-1 draw against Russia in their opening encounter before losing 4-2 to Algeria.

They must win in Sao Paulo if they are to have any chance of qualifying from while Belgium have secured their spot in the round of 16 with two wins. Those results were not exactly convincing, though, and Marc Wilmots will be hoping for an improved performance to set them up for the knockout stages.

The importance of set-pieces
During qualifying Belgium scored 33 per cent of all goals from set pieces - only Iran (40 per cent) and Nigeria (36 per cent) had more. In contrast, of the goals South Korea conceded on the way to the finals, 55 per cent of them were from set-pieces - only Iran again, with 57 per cent, struggled more. Algeria highlighted the Koreans' weakness at defending these types of situations when Rafik Halliche headed Abdelmoumen Djabou's corner home.

Right flank dominance
During qualifying, Belgium created 39 per cent of their goals from the right wing, an area which South Korea had problems defending - almost half of the goals conceded came down their own left side and Russia's late equaliser in the Group H opener started out here.

Shooting below par
Belgium have been the best side at restricting opponents' chances at the tournament so far, facing just six per match on average. South Korea themselves have taken fewer shots than all but four finalists - eight per match, well down on the tournament average of 11.5 - so do not expect a barrage from the Korean attack as they scrap to stay in the competition.

Summary
South Korea's defensive problems means coach Hong Myung-Bo could be tempted to make changes to his defensive line-up while attacker Park Chu-Young has been out of form and could give way to Lee Keung-Ho. Belgium, too, may make changes, resting players ahead of the next round, but will want to avoid defeat given the risk of facing Germany.

Regardless of these unknowns, Hong knows his side must break from their poor record in previous meetings with the Red Devils and record a first win in this tournament to stand any chance. To do so, they must be strong against Belgium's aerial threat at set-pieces and contain Eden Hazard, should the Chelsea playmaker feature and challenge the weak Korean left flank.