UEFA president Michel Platini has expressed his pride at Europe's reaction to Sepp Blattter's announcement he is set to stand for a fifth term as FIFA president.

The Football Association was at the forefront of a European rebellion against Blatter's U-turn on his promise to stand down in 2015.

Asked about the response to Blatter, Platini said: "I was very proud of the Europeans."

England's football chiefs rounded on Blatter, telling him he should stand down next year and that his claim racism was behind World Cup corruption allegations was "offensive and totally unacceptable".

FA chairman Greg Dyke responded forcefully to Blatter at a meeting of UEFA federations in Sao Paulo after the FIFA president had addressed the room indicating he would stand again for a fifth term.

Dyke said after the meeting: "What Mr Blatter said yesterday I found offensive. I said [to him], 'I regard the comments you made yesterday about the allegations in the British media in which you described them as racist as totally unacceptable.

"The allegations being made have nothing to do with racism - they are allegations about corruption within FIFA. These allegations need to be properly investigated and properly answered.

"Mr Blatter, many of us are deeply troubled by your reaction to these allegations. It's time for FIFA to stop attacking the messenger and instead consider and understand the message."

"It's time for FIFA to stop attacking the messenger"

Dyke added that it was important to clarify whether FIFA's ethics investigator Michael Garcia - who will confirm on Wednesday that he has completed his case - has had access to the files of documents obtained by the Sunday Times alleging corruption in World Cup bidding.

"We need to know from Mr Garcia if he was aware of the material in the Sunday Times before it was published and if not whether he will extend his investigation to consider these allegations," Dyke said.

Dyke said Blatter should "stick" with his 2011 decision to step down next year and warned that FIFA was suffering from the constant bad publicity.

Gill, the former Manchester United chief executive, added: "The very fact in 2011 he was clear it was just for four years - that should have been the situation. To change his mind is disappointing."

Asked if he thought Blatter should step down next year, he added: "Personally, yes, I think we need to move on. I think we need a full, frank and open debate about what FIFA needs going forward."

Gill also echoed Dyke in labelling Blatter's remark about racism being behind the Qatar 2022 World Cup corruption allegations as "unacceptable".

African officials were among those alleged to have taken payments from Qatar's former FIFA member Mohamed Bin Hammam, according to the Sunday Times.

Van Praag is regarded as a possible challenger to Blatter, along with European clubs' chairman Karl Heinz Rummenigge - although there is no expectation they would beat the incumbent president.

The Dutchman did not rule himself out of mounting a challenge if Platini decides not to stand, but Niersbach did do so. 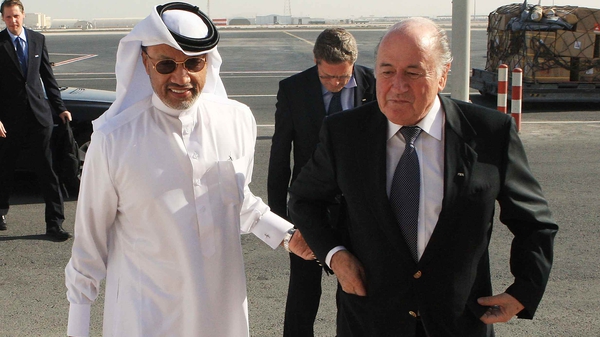