Real Madrid forward Cristiano Ronaldo is struggling to be fit for Portugal's opening World Cup match due to tendinitis around his left kneecap.

The Portuguese Football Federation revealed in a statement that the 29-year-old has been suffering from tendinitis in the patella tendon.

The FPF's medical team spoke in recent days of the Ballon d'Or winner's thigh problem, but the knee issue will be a further worry to national coach Paulo Bento ahead of the team's opener against Germany in Salvador on 16 June.

Real president Florentino Perez earlier urged the national team not to risk the 29-year-old if he was not fully fit.

He told Spanish radio network Cadena SER: "I am concerned that any player can pick up a serious injury, as has happened (in the past) with Kaka and (Sami) Khedira.

"A player like Cristiano Ronaldo should only play if he is fit."

Ronaldo had several minor niggles during the closing weeks of the 2013-14 domestic season, but went on to play 120 minutes in the Champions League final success against Atletico Madrid.

The former Manchester United man on Tuesday trained for the first time on grass, undergoing a specific individual programme in New York ahead of the squad's friendly against Mexico on Friday. 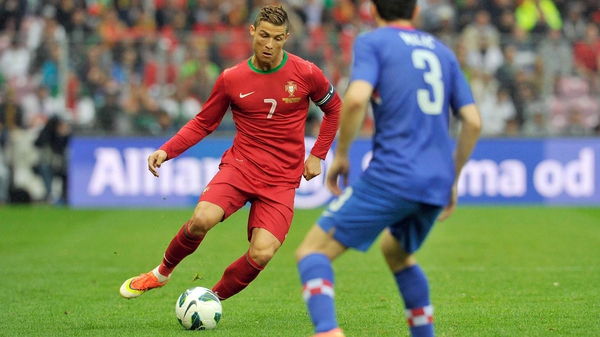