Netherlands coach Louis van Gaal believes he has a happy camp as the World Cup draws near - and he intends to keep it that way by winning.

The Dutch may have a reputation for attractive football, but some of their previous tournament pursuits have been undermined by infighting within the squad.

Van Gaal experienced such disharmony himself during his first unsuccessful stint as national boss, when his side failed to qualify for the 2002 World Cup.

The 62-year-old is not sensing any problems this time around as his squad prepare to fly to Brazil on Thursday, and he feels he has a duty to make sure that remains the case.

Van Gaal, who will take over as Manchester United manager after the World Cup, said: "It's also dependent on the management, it is not only the players. I think it is about the relationship between a manager and his squad.

"In my first episode there was that (disruption) but I have understood now. They like me now.

"I feel there are not any problems. We have a very good relationship, but it is also dependent on the results. At this moment we don't lose so much."

Netherlands host Wales at the Amsterdam Arena on Wednesday in their final friendly before travelling to South America.

They face champions Spain in a repeat of the 2010 final in their opening match in Salvador on 13 June before facing Australia and Chile in their other Group B games.

"At this moment we don't lose so much" - Louis van Gaal

Van Gaal knows well how Spain will approach the game having nurtured some of their talents in one of his previous roles at Barcelona.

He said: "I'm proud not only of Xavi and (Andres) Iniesta but also (Carles) Puyol and (Victor) Valdes, who are injured and not playing against us.

"I'm proud, but we can resist against these creative midfielders - although it shall be difficult."

Thousands of fans turned up to see Van Gaal put his players through their paces in a public training session at AZ Alkmaar's AFAS Stadium on Tuesday.

Van Gaal is expected to stick to the side that beat Ghana last weekend to face Wales, with the exception of one change caused by an injury to Jonathan de Guzman.

The midfielder, who has spent the last two seasons on loan at Swansea from Villarreal, suffered a hamstring injury in training earlier this week, but Van Gaal is hopeful he will be fit for the World Cup. 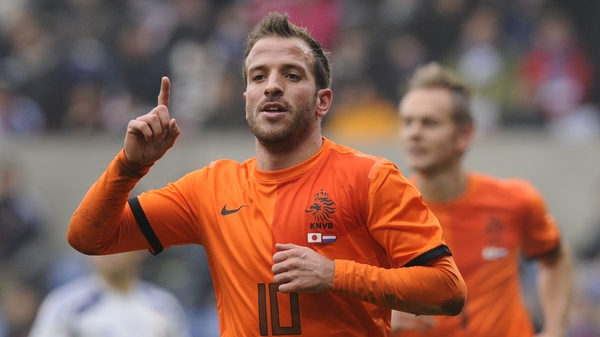