FIFA president Sepp Blatter has described the decision to award Qatar the 2022 World Cup as "a mistake".

Blatter said that the technical report into Qatar's bid had warned that it was too hot but despite that, FIFA's executive committee had voted for the Middle Eastern country.

The FIFA president said it was now "probable" that it would be played in the winter rather than the summer due to the heat.

Blatter told Swiss TV station RTS: "Yes, it was a mistake of course, but one makes lots of mistakes in life.

"The technical report into Qatar said clearly it was too hot but the executive committee - with a large majority - decided all the same to play it in Qatar."

Blatter insisted however that Qatar had not "bought" the World Cup - the bid did spend large amounts of money on sponsorship and development programmes.

He added: "No, I have never said it was bought, but that it was due to political considerations."

"It was a mistake of course, but one makes lots of mistakes in life"

FIFA issued a statement insisting Blatter had not questioned Qatar as hosts.

It read: "As explained in his answer to the journalist, the president reiterated that the decision to organise the World Cup in summer was an 'error' based on the technical assessment report of the bid, which had highlighted the extremely hot temperatures in summer in Qatar.

"At no stage did he question Qatar as the host of the 2022 FIFA World Cup."

Blatter also made clear his determination to continue as FIFA president having initially stated in 2011 that he would stand down in 2015.

He added: "I have said I want to continue, of course I have the desire to continue.

"The path to the throne is not yet open. There are a lot of people who would like to take this position but they realise it is not easy to direct an organisation with 300million members." 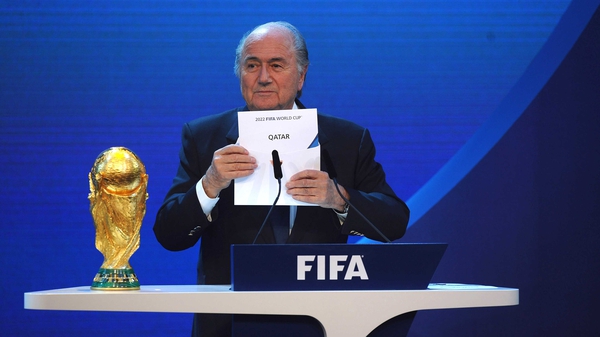