UEFA is set to insist that Euro 2020 venues must be served by an airport with at least two terminals.

With 13 cities set to host the matches European governing body is anxious to ensure that air travel will not be an issue.

One of the criteria laid down by planners is that each host city must have two airports or at a minimum two terminals so the two sets of fans can be kept apart.

That is likely to be something of a headache for Cardiff - its airport has a single terminal, and the Welsh FA would have to argue that Bristol or even airports further afield could be used as an alternative for fans.

Dublin is expected to bid to host group matches at Euro 2020, which for the first time is to be held across Europe.

The English FA is to bid to host the semi-finals and final at Wembley, or group matches and quarter-finals if that is unsuccessful.

Rival bids for the final are expected from Istanbul - the favourite if it is unsuccessful in its 2020 Olympic bid - plus Madrid, Berlin and Rome.

Two cities with smaller-capacity stadiums will be among the 13 chosen as Euro 2020 hosts in an effort to broaden the reach of the tournament.

Officials drawing up plans for the tournament have said that two host cities can have a stadium capacity as low as 30,000, that 10 stadiums will have a 50,000 minimum capacity and four of those hosting the quarter-finals to have grounds of at least 60,000.

The stadium that hosts the two semi-finals and final will have to be able to seat more than 70,000 fans.

UEFA's executive committee is expected to agree to the plans at its meeting on 28 March.

The idea in having two 30,000-seater stadiums means smaller countries will be able to enter the bidding - only 21 of the 53 UEFA member nations have stadiums of 50,000 or more.

Tournament planners believe that host countries will be able to play at least two of their group matches at home.

UEFA will also to try to arrange groups on a geographical basis to avoid long journeys across Europe for fans. 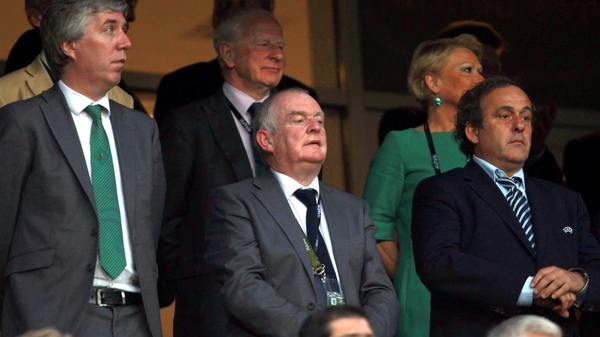