Based on how close they are to each other in the SSE Airtricity League table, there will be little to choose between the north Dublin rivals when they meet with an Extra.ie FAI Cup semi-final spot at stake today.

Bohemians have the edge on that front, three points clear of Damien Duff's Shelbourne but having played a game more.

And they have also had the better of the head-to-heads, with Bohs claiming two wins - including a dominant 4-1 victory albeit all the way back in April - as well as a pair of draws.

Discipline, or lack of it, has coloured most of the fixtures between both teams in the league, with red cards in three of the four meetings. So expect this to be ferociously fought between two sides looking to make a breakthrough amid consistent inconsistency.

It will mark the third match in charge of Bohs for interim manager Derek Pender since replacing long-time boss Keith Long and the report card thus far reads a derby win over Shamrock Rovers and a defeat at in-form Derry City.

For his own long-term prospects of potentially taking on the managerial vacancy permanently - Bohs having a chance to qualify for Europe and also to give fans something to shout about after the cup final pain of last year - Pender and his side will be keenly targeting the visit to Tolka Park.

As will Duff and Shels. The safety of lower mid-table is a solid return for a first season back in the top flight. But struggles in front of goal and aforementioned inconsistency will be a source of some frustration.

Recent form leaves them as the only Premier Division club without a win in their last five league outings since back-to-back wins over UCD and Finn Harps.

A goal drought has contributed to that statistic. Since Shane Farrell converted a penalty against Bohs this time last month, Shels have failed to find the net in their next three league games, picking up just one point, and only UCD have scored fewer than the club's total of 25 goals this campaign.

However, a cup run can always help to give a rosier hue to a campaign and edging a little closer to a first final since their 2011 defeat to Sligo Rovers would be a boost for a young squad.

Duff said: "We're near on full strength, for the first time in a long time. Everyone except Conor Kane and Dan Hawkins.

"The temporary [Bohs] manager has come in, not an awful lot has changed in the way they play and set-up. They'll come out all guns blazing we know. They had a win against Rovers, that was a big one for them.

"It’s a big day for the club, I don’t remember the last real big game like this at Tolka, one with proper juices flowing. A big prize at stake, full house, sold out, it’s been a long time since we’ve had a game like this.

"We’ve had a good week’s training, the cup will always carry an emotional edge, but we’re treating it like a normal game. We know the consequences of winning, what might happen, where you might go. It’s a massive opportunity for us."

"It makes for a cracking game"

Opportunity knocks for the Candystripes as they welcome the SSE Airtricity League leaders to the Brandywell.

The wind is back in the sails at Derry City, who have won five on the bounce without conceding, including the FAI Cup last-16 clash against Cork City.

That has left the door to a title tilt slightly more ajar than it had been, which makes the visit of the side they are chasing down all the more intriguing - especially considering Shamrock Rovers are making the trek to Foyleside after a midweek which saw them make the journey to and from Belgium for the 3-0 defeat to Gent in the Europa Conference League.

"We've lost a game. We've made mistakes, we need to learn from it and move on," said Shamrock Rovers manager Stephen Bradley.

"It's two good teams and all the games between ourselves [and Derry] this year have been tight, so I don't see tonight being any different. It's a tough game but we'll be ready, we'll be going there looking to win the game and make sure we're in the next round."

Aidomo Emakhu is suspended for the Hoops but Sean Hoare and Richie Towell could return from injury.

"We need to look at them in training and make a call on that today, but both have been doing really well," said Bradley. "Pico [Lopes] is not too far away now."

Speaking on Friday, ex-UCD and Hoops midfielder Paul Corry had felt it would be "a big ask" to expect Bradley's side to emerge victorious "given the back-to-back nature of what Rovers are juggling right now" on three fronts.

That is also factoring in Derry's own revival after enduring a mid-season blip, helped by Michael Duffy's return from injury. Even if the league ultimately proves out of reach, earning silverware in the cup would lay down an encouraging marker for a side investing in a strong squad for the future.

Ruaidhri Higgins will also be encouraged by how his side have performed in their meetings with Rovers this season.

A 2-1 win over the reigning league champions at the start of the season was a fillip during an impressive start to the campaign, while they will count themselves unlucky in the 1-0 loss at Tallaght Stadium in May, before a stalemate which saw Hoops keeper Alan Mannus rescue his side as Derry pressed last month.

The top two in the league now face off in Sunday's #FAICup quarter-final - watch @derry city v @ShamrockRovers live on @RTE2 and @RTEplayer from 4.30pm pic.twitter.com/egHdf5LQaR

City boss Ruadhri Higgins has been unmoved this week by any suggestions that the Hoops' recent schedule might give his side an edge in the contest.

"If any club is capable of handling those demands it is them," he suggested. "They played last Thursday night as well and were four up against Finn Harps at half time on the Sunday, so no, I don't see that as a factor at all.

"I know how important this competition is to players and supporters alike and we'll be doing everything in our power to be in the semi-final draw."

With one half of the last-four line-up already made up of First Division clubs - Waterford and Treaty United pulled off outstanding quarter-final wins on Friday night - all four of the teams in action on Sunday will fancy their chances should they progress to the semis.

Watch live coverage of the Extra.ie FAI Cup quarter-final between Derry City and Shamrock Rovers on 18 September (kick-off, 5pm) on RTÉ2 and the RTÉ Player. 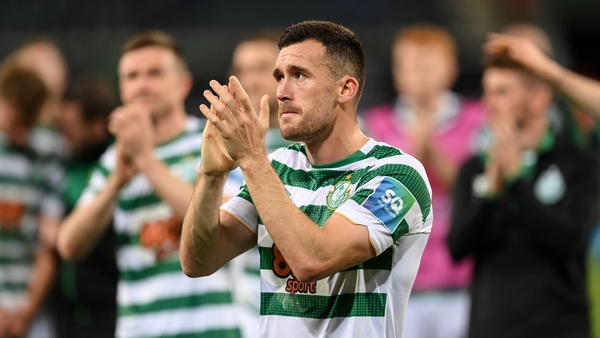