Sligo Rovers have played an unusual role in the twists and turns of this season's SSE Airtricity League Premier Division title race.

They appeared to end any hopes Dundalk had of putting serious pressure on Shamrock Rovers when they defeated the Lilywhites 2-0 at the end of August.

However, last week the FAI concluded that the Bit O'Red fielded an ineligible player in the fixture, and the result was overturned.

Dundalk then blew their second chance when they slipped to a shock 3-2 loss to UCD last Friday, and so it's now up to Derry to prevent Shamrock Rovers from easing to a third title on the bounce.

Can Sligo throw another spanner in the works?

They head to the Ryan McBride Brandywell Stadium on Tuesday evening (KO 7.45pm) after the original fixture was postponed because of Sligo's involvement in Europe.

The Candystripes are targeting a fourth win on the bounce and are unbeaten in their last 11 league games, while Sligo ended a tough week with a good 2-0 win at Shelbourne on Friday.

"There is a lot of football still to be played and plenty can happen between now and the end of the season, so we're just concentrating on ourselves and each game as it comes," said Derry boss Ruaidhri Higgins.

"Sligo are coming here on the back of successive league wins themselves and in Adrian Keena have the league's current top goalscorer, so we're well aware we will need to be at our best."

Higgins was satisfied with Friday night's win over Bohemians that lifted his side back into second place in the table.

"It was a difficult game in different ways, but the players gave everything," he said.

"Michael Duffy's sensational goal gave us a thoroughly deserved win. Our supporters were absolutely brilliant too and the Brandywell was rocking. The difference they can make on nights like that is really massive - the players responded to it." 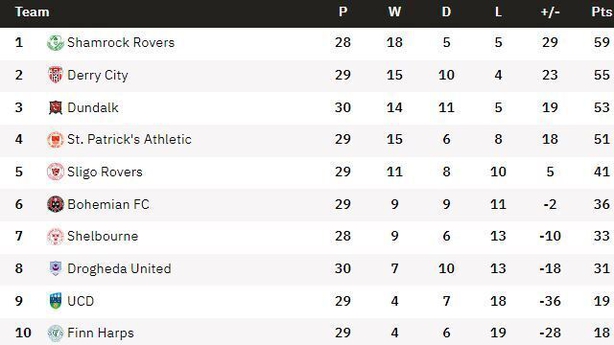 Ciaran Coll's nasty neck injury saw the Bohs game stopped for 15 minutes in the first half and although the left-back is recovering well, he will miss Tuesday's match.

"Ciaran is out and Sadou Diallo had to come off against Bohs as well," Higgins confirmed.

"Declan Glass is very near a return to the squad so we'll have a look at both of them at the start of the week and decide then."

The win over Shels meant Sligo stayed within 10 points of St Pat's in the race for Europe and manager John Russell said he was: "Pleased by the character shown last weekend. We grew into the game and got a good result away from home.

‘’Tonight will be another tough test. Derry are in decent form and have some good attacking players so we know we will have to be at our best.

Rovers continue to be without long-term absentees Garry Buckley and Seamas Keogh. Keogh is improving every week and hopes to return soon.

Follow Liverpool v Ajax via our live blog on RTÉ.ie/sport and the RTÉ News app, or watch live on RTÉ2 and the RTÉ Player from 7.30pm.