The First Division men, who had striker Ruairi Keating harshly red-carded in the second half, never really threatened and were lucky they didn't suffer a heavier loss.

Cork had the opening chance of the tie on four minutes, but Keating's right-footed strike from the angle was easily gathered by Derry goalkeeper Brian Maher.

Derry took the lead on 11 minutes from the penalty spot as Will Patching made no mistake, firing high into James Corcoran's top right-hand corner after the Cork keeper had initially given away the spot-kick when he ran into the back of Ryan Graydon.

The home side were inches away from doubling their lead on 25 minutes but Michael Duffy's curling effort from the left, which had Corcoran beaten, came back off the post.

Derry continued to dominate things but they still couldn't get that second goal and on 38 minutes McEleney's close-range side footed strike was blocked by Kevin O'Connor.

Cork were reduced to ten men on 50 minutes as striker Keating was dismissed after a heavy challenge on Derry centre-back Mark Connolly.

Minutes later Derry should have added a second but McEleney's close-range header was straight at Corcoran.

Derry finally scored a second goal on 73 minutes as Sadou Diallo blasted low into the left-hand corner, giving Corcoran no chance to all but end the cup tie.

In the closing stages Derry gave the likes of Ronan Boyce, Brandon Kavanagh and Jamie McGonigle some game time, with the club's leading marksman going close in stoppage time, but his shot was blocked.

Right at the death Diallo was inches away from scoring his second, but his piledriver from 25 yards, which had Corcoran scrambling, hit the side netting. 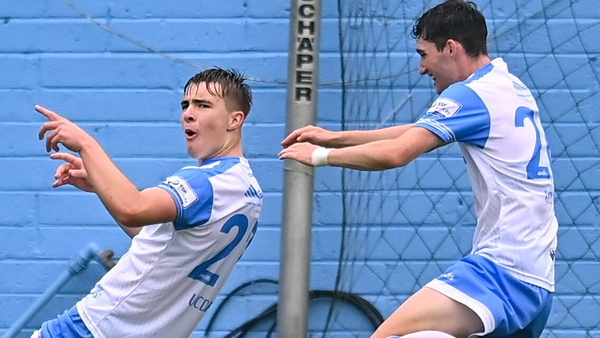