Keith Long believes his Bohemians reinforcements have arrived in style after they made it three wins on the spin in all competitions in progressing through the FAI Cup first round last night.

The Gypsies saw off Finn Harps 3-1 as home goalkeeper James McKeown had a night to forget.

Long promised changes to his squad after a less than impressive first half of the season.

He also lost Dawson Devoy and Promise Omochere to England in this window.

As a result he has brought in eight new players to Dalymount Park.

McDaid found the net to open the scoring last night, while several other players have made their first appearances this month.

Long told RTÉ Sport: "We've had lots of new players come into the team. Declan McDaid makes his full debut, James Clarke who only trained with us for the first time on Thursday, but has been playing well for Drogheda every week, and he has slotted in really well. It was pleasing to see them combine for the first goal.

"Declan took it really well off his right foot and James made a lovely run between their two defenders. He delivered a good cross.

"The goalkeeper gifted us one or two which we're thankful for but we showed moments that we can pass and move it really well and we have some very good players.

"It looks like we have a little bit of depth to our squad now. Yes, we've lost a lot of players, really good players in terms of Dawson Devoy and Promise Omochere, but we also have added some quality and experience.

"John O'Sullivan will get fitter and stronger and be a good influence around the team. John has come in and scored a goal which has been pleasing.

"Ethan off the bench, Ryan Burke made his debut and slotted in very nice down the side. Ali Coote came off the bench, Kris Twardek, it gives us options. There's lots of positives to take.

"The dilemma you have as a manager is you can't use all your players all the time, I think we had strength in depth on the bench tonight which gives us good options."

Bohs will take their place in the last 16 of the FAI Cup, looking to go one better than last year when they suffered heartbreak on penalties against St Patrick’s Athletic.

With a top four finish a realistic target for the remainder of the season, and other rival teams distracted by their involvement in Europe this season, Long is hopeful of a strong finish to the year with his new men on board.

Long concluded: "It was job done and into the next round of the competition. The only Premier Division tie of the round, a very tricky place to come despite their form, we knew they would put it up to us tonight. It wasn't an easy game by any means. Thankfully we've come away with a win.

"We can't look back at last year. We want to do well in every competition. Our league form hasn't been what we wanted to be. But that’s three win on the bounce now, two in the league and tonight. We're pleased with that and we're looking forward." 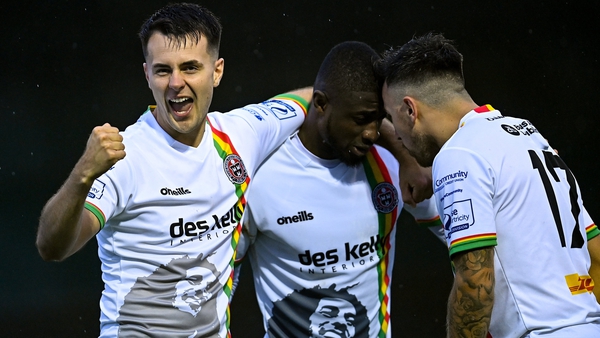