Stephen Bradley said the Shamrock Rovers fans should be proud after their team's "outstanding" performance in their 2-1 second leg win over Ludogorets, but castigated the referee's "unbelievable" decision to book Richie Towell when the visitors could have been reduced to nine men.

Trailing 3-0 from the first leg in Bulgaria, the hosts gave a rousing performance in Tallaght, Aaron Greene giving them an early lead to set in train an interesting evening.

The Bulgarians were reduced to 10 men early in the second half but the Hoops couldn't find the second goal until two minutes from time, Aidomo Emakhu scoring to tee up a potential grandstand finish. Alas, Cauly Souza shot back in the opening minute of injury-time, killing off the tie and sending the Irish champions to the Europa League.

"I thought the players were outstanding. Everything you wanted to bring tonight, they brought," Bradley told RTÉ Sport's Tony O'Donoghue after the game.

"I think every supporter should be going home proud of their team and what they've produced tonight.

"You got to understand the level of player they've played against tonight, the level of opposition. The level of investment they have. And our team has been by far and away the better team tonight.

"We're frustrated and disappointed we haven't gone through.

"I think the big decision is when Richie is in on goal. It's a really poor decision when you see it back. It's a red card. You need them decisions to go your way in games like this. It's small margins and it didn't go our way."

On the 51st minute mark, excitement levels around Tallaght Stadium increased when Manuel Cafumanna was sent off following a second bookable offence. Bradley said the sending off allowed his team to attack with more abandon and he threw on Emakhu, Farrugia and Gaffney as he sensed the nerves ratcheting up in the opposition dugout.

"It allowed us to free up the midfield a little bit. We had to be very careful on 11v11. They're very dangerous in transition. We knew that and had to make sure we were strong. When they went down to 10, it meant we could free it up there, which left us a little bit exposed but obviously created chances for us.

"I didn't want to bring Rory on to be honest, he's a booking away from being suspended. But I just felt they were there for the taking. They were gone, you could feel it. You could feel the energy around them, in the dugout and on the pitch. They were arguing with each other. I felt it was time to go for them.

"Rory and Aidomo came on, I thought Aidomo's goal was a brilliant finish.

"It was frustrating. We started so well. We had them on the back foot. If another one goes in, it's a totally different game. We can relax and wait for the third to come. It wasn't to be.

"I still go back to that key decision of the referee. In these games, you need them decisions to go for you. The ref has made an incredible decision. He said Richie has dived when he's through on goal which is unbelievable."

Notwithstanding the 3-0 scoreline last week, Bradley felt, having re-watched the opening leg, that his team weren't that far off the Bulgarian champions and had the tools to threaten them in Tallaght.

"I've watched the game (first leg) back. We knew there was only a 10 or 15 minute spell where they looked really dangerous. They had the majority of possession over there for the first 25 minutes but they never really hurt us. Then, they had 10 minutes where they scored the two goals.

"People get carried away with scorelines rather than analyse the game. It's our job to analyse the game and we knew we were right there. We knew we could press them more aggressively tonight and cause them problems."

Bradley's side are now bound for the Europa League preliminaries and a meeting with North Macedonian champions FK Shkupi - who lost 3-2 on aggregate to Dinamo Zagreb.

"We watched the first leg on that game and they were the better team. They should have gone back to Macedonia with a two or three goal lead. It's going to be a difficult game but at this level, they're all difficult.

"If we perform like that tonight, it's going to take a very good team to beat us over two legs."

Rovers defender Sean Gannon felt that the second leg victory over Ludogorets puts the Hoops in a good place going into next week's Europa League encounter, and felt that the overall performance proved to the team that they can compete at a very high level.

"What we have proved tonight is that we can play at that level and that we have that level of performance in us," said Gannon, speaking to RTE Sport.

"I thought we were excellent and it gives us confidence going into the European game next week. That’s our level and it’s important that we stay at that level and we keep pushing each other to get better.

"I thought the momentum was with us (after the second goal). We had loads of chances and on another day one or two of them go in."

The defender backed up his manager’s opinion that Towell was taken down on the edge of the box, however, he admitted that he was a long way from the play to say for certain.

"From where I was, it looked like he was taken down, but I was at the other end of the pitch." 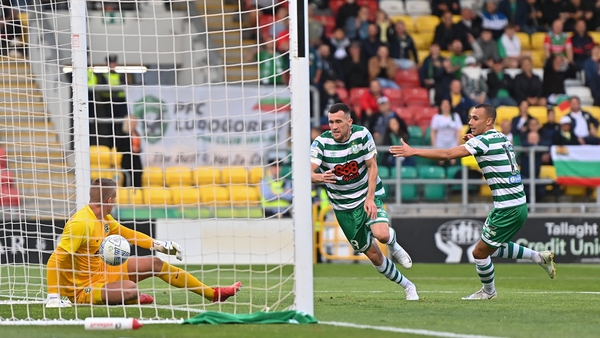