Dean Williams came back to haunt Dundalk once again as Drogheda Utd put a major dent in their neighbours' title hopes with the only goal in the 170th Louth Derby at Head in the Game Park.

While Stephen O’Donnell’s side continue to sit in second place in the SSE Airtricity League Premier Division table, this was the first of two games in hand they had over league leaders Shamrock Rovers.

They were unable to take advantage to close the gap to seven points, however, as Williams’ goal inside the opening minute saw the former Hoops youngster sink the Lilywhites for the second time this season, having also scored the only goal in the previous meeting in Drogheda back in March.

While this was just a third defeat of the season, the result means Dundalk have won just twice in 11 games on the road all season, with their struggles away from Oriel Park emphasised by the fact that this was the sixth time they have failed to score on their travels.

Kevin Doherty’s side were full value for their win in what was a fiery affair in which seven players were booked, with the victory seeing them open up a 13 point gap to ninth placed Finn Harps who lost away to Shelbourne at Tolka Park.

The sides emerged to the sight of flares from both sets of supporters but the travelling fans were stunned into silence when Drogheda took the lead after just 53 seconds.

Andy Boyle failed to deal with Evan Weir's cross from the left, presenting Williams with the chance to turn and rifle to the top right hand corner for the first goal that Dundalk had conceded in 472 minutes of action.

The visitors looked to fight their way back into the game and almost responded on three minutes when David McMillan rose highest to meet Darragh Leahy’s free kick but the striker couldn’t keep his header down.

Daniel Kelly had two further chances after that, firing over after being picked out by Mark Connolly on 23 minutes before curling high and wide after cutting in off the right on 40 minutes.

Dayle Rooney then threatened to double the Boynesiders’ advantage a minute before the break when his quick free kick almost caught Nathan Shepperd out, with the Welsh U21 goalkeeper just managing to turn it around the post. 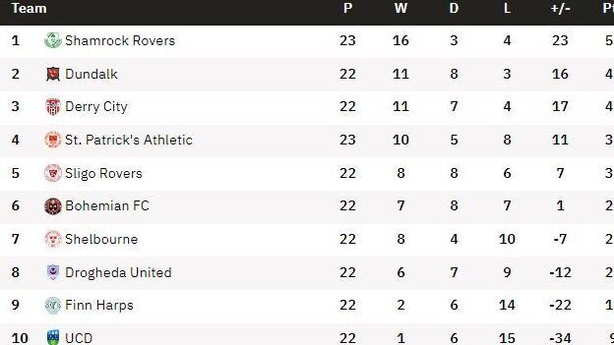 It would take until three minutes after the restart for Dundalk to test Colin McCabe for the first time with Darragh Leahy - scorer of two goals against Drogheda at Oriel Park back in April - getting a header away that was straight at the goalkeeper.

Williams went close to a second on 59 minutes when he was slipped in by Darragh Markey only to be denied by a strong hand from Shepperd.

Greg Sloggett then had a goalbound header from a corner headed clear off the line by Gary Deegan on the hour mark before Markey fired wide at the other end six minutes later following a mistake by Kelly.

Kelly would have Dundalk’s last chance on 73 minutes following a good break involving substitutes Patrick Hoban and Keith Ward but the winger’s effort was straight at McCabe.

Despite plenty of late pressure from the visitors and five minutes of additional time it was Drogheda who went closest to scoring at the death with Darragh Nugent twice going close in stoppage time.