Shamrock Rovers player of the match Rory Gaffney admitted he was fortunate to remain on the pitch during the Champions League qualifier win over Hibernians after a stray boot made contact with an opponent's head.

The Galway native was instrumental in the League of Ireland side taking one step towards the second qualifying round, setting up both first-half goals before getting on the scoresheet himself in a 3-0 win over Hibernians of Malta.

Gaffney, however, could easily have been dismissed before the crucial third goal when he appeared to kick out at defender Gabriel Artiles after being manhandled to the ground.

"I think what the referee has made a decision on here is that he was provoked into doing it, but my God, is he lucky to get away with that. I don’t know many other referees that would allow you to raise your foot like that."

Gaffney admitted making contact with Artiles, but insisted it was not a deliberate action.

"I definitely caught him, but I didn't mean to catch him," he told RTÉ Sport after collecting his player of the match award.

"I tried to get him off me, but I didn’t think I was going to...I think I caught him on the chin or something, but it was accidental."

With regards to the team performance, Gaffney recognised the importance of the third goal. While the Maltese outfit looked limited in the opening 45 minutes, they hit the woodwork twice in the second half before the hosts gave themselves a sizeable cushion ahead of the return leg.

"The third goal was vital. They nearly scored to make it 2-1 after I gave the ball away, but thankfully we were able to get the third goal and make it an easier tie next week.

"We want a run in Europe, it’s the next thing this team needs to do."

Meanwhile boss Stephen Bradley expects a sterner test in the return leg next week. The visitors were missing some important players through suspension but will be disappointed with their showing in Dublin; a display that leaves them with a huge mountain to climb.

"It's just half-time, but we’re happy with the position we are in at half-time," said Bradley.

"We’ll review it, see where we can improve and get better and go and try and finish the job next week.

"I think we saw second half what they will bring next week. I think they will be a lot more direct with runners off the ball. We’ve got to make sure we are ready for that." 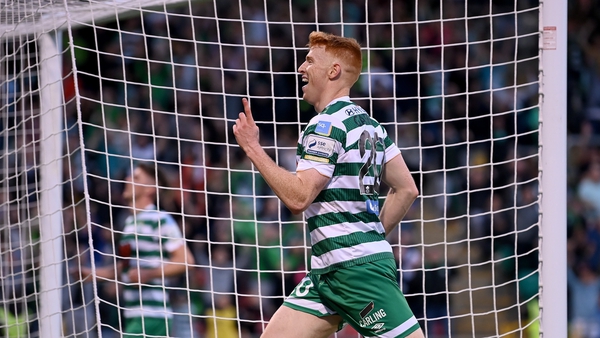