Shamrock Rovers have given themselves a cracking chance of progressing to the second qualifying round of the Champions League after a relatively comfortable win on a cloudy night in Dublin before over 7,000 fans.

First-half goals from Ronan Finn and Dylan Watts, Rory Gaffney setting up both, reflected Rovers' dominance and patience; Gaffney added the third and, on this evidence, they should get the job done in Malta next week.

The Hoops were patently superior to a plucky Hibernians side and will fancy their chance of a likely meeting with a much better outfit in Ludogorets Razgrad, who won the first leg of their tie 2-0, in the next round.

Rovers were extremely fortunate not to concede in the third quarter as Hibernians belatedly showed some offensive nous and it might prove critical that they avoided giving away an away goal to the Maltese champions, who presumably will be better equipped than Rovers for the Mediterranean heat.

The game, however, looks up for them after the third goal, which also involved a bit of fortune for Rovers, perhaps the luck of the Irish in Tallaght.

With Danny Mandroui off to Lincoln, Jack Byrne out injured and Graham Burke in the same bracket, Rovers had to showcase the spread of talent in offensive midfield areas.

Stephen Kenny was among the crowd and it got noisy on two minutes as Watts threaded a ball through for Gaffney, whose effort was deflected into the arms of Ibrahim Koné.

Moments later Aaron Greene had a better chance but hooked over, appearing to be hurt from a Hibernians last-ditch tackle. Watts has been in superb form for Rovers and continued to probe, dragging wide from a left-footed effort on 12 minutes.

Then Gaffney fed the lively Gary O'Neill, who also dragged his shot wide.

The first quarter was completely dominated by the home side but they lacked pace in key areas and didn't quite have the guile to create a proper opening.

And then it came on 25 minutes.

Two of the Hoops thirty-somethings combined, Gaffney squaring brilliantly for Finn, who couldn't miss – his first goal of the season. Much has been made of TJ Reid's heroics in the capital last weekend and here was another sprightly 34-year-old creating headlines.

The Maltese did fashion a chance on the half-hour mark; luckily for Rovers, Dunstan Vella's header was no trouble for Alan Mannus.

Sean Hoare had legitimate calls for a penalty shortly afterwards from a corner that came to nothing as Gary O'Neill pulled the strings in the Rovers midfield.

The second goal on 40 minutes was similar to the first, Gaffney crossing with his left but this time Watts was the one to connect expertly and make it 2-0.

It was all Rovers at the start of the second half, McCann striking over the bar five minutes in before the raucous home support.

Hibernians quality was hitherto a rare thing but, out of nowhere, they struck the crossbar on 53 minutes, some nice play resulting in a rasper from big Tereence Groothusen, a half-time substitute, which had Mannus beaten.

Groothusen was a handful and Hoare had to get there before him after an hour of play, Rovers reminded the tie was not over.

Indeed, they had a quite remarkable let-off moments later as Thaylor was allowed in, Lee Grace faltering in pursuit, but he somehow struck the outside of the post with an aeon of time to compose himself and only Mannus to beat.

After a brilliant Rovers move Gaffney nearly had Greene in, the second half more open than the first.

Greene was then the victim of what seemed a marginal offside call and made way for Aidomo Emakhu.

Tensions spilled over between some home fans and the pocket of visiting supporters in the main stand after a fracas involving Gaffney; the stewards and Gardaí had to intervene.

Replays suggested Gaffney kicked out and was extremely lucky to stay on the pitch – a crucial moment, as it would transpire. No wonder the Maltese fans were apt to lose their cool.

Finn continued to threaten down the right, defying his advancing years, and the ball broke for Watts, who powered an effort that Koné parried.

Gaffney got the goal his man-of-the-match performance merited with 12 minutes to go, coolly slotting in from close range.

Emakhu nearly got in on the act near the death but it should prove immaterial. 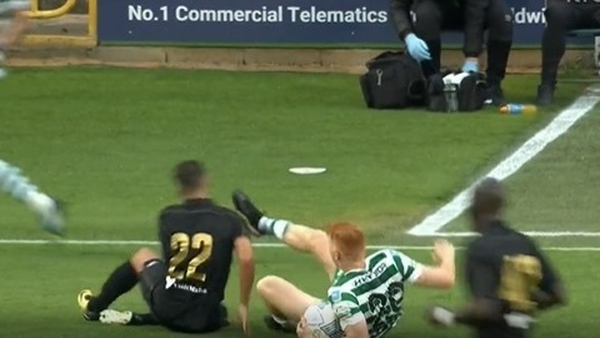