Manchester United secured a ticket to next season's Europa League after they ended their Premier League campaign in sixth place - despite losing 1-0 away at Crystal Palace.

Forward Wilfried Zaha scored against his former team in the first half as Palace celebrated their first-ever Premier League victory over United at home.

United were nevertheless able to hold on to sixth place after West Ham United suffered a 3-1 defeat at Brighton & Hove Albion and had to settle for seventh.

Watched by new manager Erik ten Hag from the stands, United produced a lacklustre display and went behind in the 37th minute as Zaha finished smartly from the edge of the box after picking up a loose pass and cutting across the United defence.

The visitors tried to improve their game in the second half but they looked poor in attack and barely created chances as Patrick Vieira's Palace ended the season on a winning note and took the 12th spot.

West Ham squandered a lead to lose to Brighton at the Amex Stadium.

The Hammers, who suffered semi-final heartbreak in the continental competition just over two weeks ago, were on course to leapfrog Manchester United into sixth position following Michail Antonio's stunning 40th-minute opener.

But second-half strikes from Joel Veltman, Pascal Gross and Danny Welbeck turned the game in the Seagulls' favour to prevent David Moyes' men capitalising on United losing 1-0 at Crystal Palace.

The east London club must be content with a place in the Europa Conference League next term following a result which saw Brighton secure a maiden top-half finish in the Premier League - and the highest league position in the club's 121-year history. 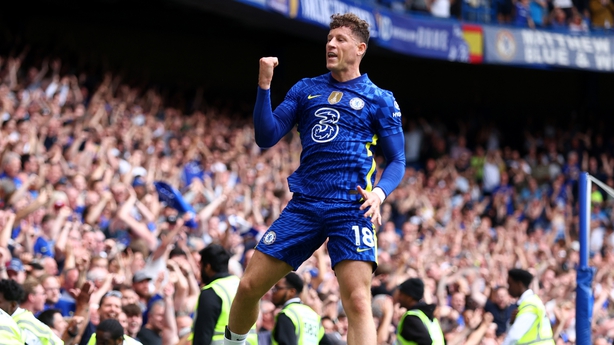 Ross Barkley fired the final goal of the Roman Abramovich era as Chelsea edged past Watford 2-1 to tie up a third-place Premier League finish.

One-time England midfielder Barkley could leave Chelsea this summer, and the 28-year-old can be reasonably satisfied if this late winner becomes his Stamford Bridge sign-off.

Kai Havertz's early tap-in had Chelsea in control until Dan Gosling headed home with two minutes on the clock.

Barkley quickly turned in Reece James' cross however, to ensure that Chelsea just about ended their home Premier League campaign with more wins than draws.