Liverpool manager Jurgen Klopp insists his side will not stop in their pursuit of Manchester City and trophies whatever the outcome of the title race this weekend.

The Reds face Wolves at the weekend needing to better City's result against Aston Villa, managed by former Liverpool captain Steven Gerrard, to claim a record-equalling 20th championship and a domestic treble.

They also have a Champions League final reunion with Real Madrid in Paris on 28 May but even if they miss out on one or both Klopp said his side would not go away next season.

"Yes, we have the best opponent in world football, which is a bit of a shame, but they have us in their neck, which is not too cool as well. So let's see."

Klopp believes they have the psychological advantage as the Premier League trophy is City's to lose, having been front-runners for so long.

The finale is uncannily similar to that of 2019 when Liverpool were pipped to the title by City despite a record points haul (97) for a runner-up before a victorious Champions League final against Tottenham in Madrid. 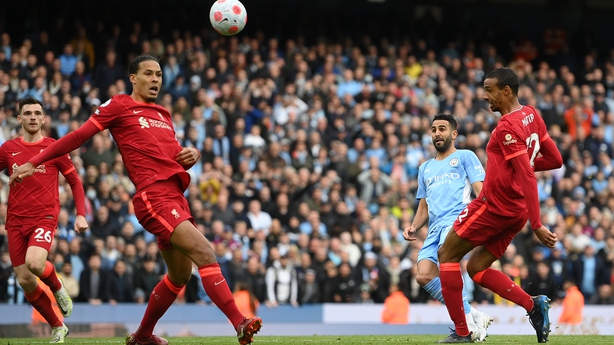 On that occasion Klopp's side, who have reduced a 14-point deficit in January to one point, were second-favourites and he sees it similarly now.

"I cannot talk about pressure for the other team but it's like this for us: there is no pressure," he added.

"We know that we have to win the football game but we've had that now for a while.

"For us, it is pretty positive, it is so special. If you have something to lose it feels different but we don't have that.

"We have been in situations like this before and we know it is not easy but most of the time we have dealt with it OK.

"I have no reason to think why Man City wouldn't but the situation is different. Ours is full throttle, give it a try and let's see what the outcome is.

"Whatever happens on Sunday, I will not forget that it has been an absolutely fantastic season.

"So enjoy the journey is what I always say because you never know what the outcome is, so you better enjoy it now because that is what we did so far."