Arsenal tightened their grip on fourth place in the Premier League after goals from centre-backs Rob Holding and Gabriel delivered a 2-1 victory over West Ham at the London Stadium.

The Gunners struck from corners in each half to secure a crucial three points in their race for Champions League qualification and for the time being hold off closest rivals Tottenham, who overcame Leicester 3-1 earlier in the day.

Bukayo Saka was an influential figure throughout and Arsenal would have won more comfortably had Eddie Nketiah not been so wasteful, but West Ham were magnificent given their Europa League semi-final commitments and shortage of defenders.

Star forward Michail Antonio only appeared as a second-half substitute after Thursday night's 2-1 defeat by Eintracht Frankfurt and Declan Rice started even though the away leg is only four days away.

West Ham's biggest problems were in defence, however, where injury and suspension left Kurt Zouma as the only fit centre-back and at times even he appeared to still be hampered by his recent ankle injury.

But they emptied the tanks and took the game to their London rivals for long spells, looking the stronger side and equalising through Jarrod Bowen before eventually falling to a defeat that mathematicaly ends their own designs on fourth place. 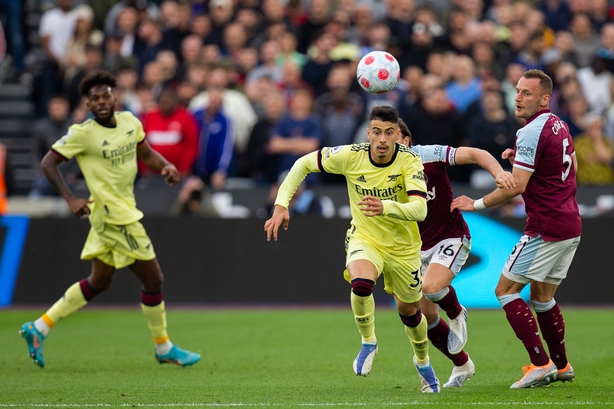 For all the demands of their European campaign, West Ham started brightly and Aaron Ramsdale needed to act decisively to deal with an inswinging corner by Bowen.

Saka was determined to make something happen for Arsenal during a promising attack that eventually came to a halt.

West Ham were on top but there were few thrills at either end and when Holding inexplicably passed the ball into touch it summed up a lifeless opening spell.

When action did occasionally break out it took place at Arsenal's end and in the 30th minute it needed a determined block from Holding to deny Manuel Lanzini from close range after Vladimir Coufal's pass had deflected off Nuno Tavares.

Rice shot straight into the arms of Ramsdale but soon after it became the Gunners' turn to threaten, with Nketiah the catalyst as they crept ahead against the run of play.

Nketiah threaded his way into the box to force a save from Lukasz Fabianski and from the ensuing corner Saka found Holding, who nodded home his first Premier League goal.

Rice was at the heart of West Ham's response that meant they entered half-time all square as he forced a smart save from Ramsdale before launching the move that led to their equaliser.

A long pass into the box found Coufal and the Czech defender controlled the ball brilliantly before picking out Bowen, whose shot deflected off Gabriel and into the net.

The second half started at a frantic pace as Bowen was shown a yellow card for simulation as he avoided Ramsdale's lunge, amid a breathless spell for West Ham that ended abruptly when Arsenal added a second. 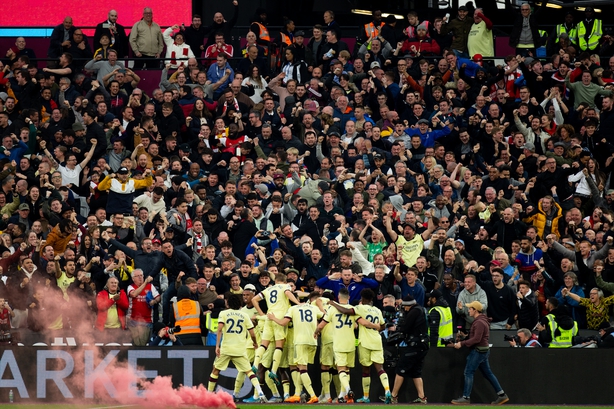 Once again they pounced from a corner as the ball found Gabriel Martinelli, who crossed to his unmarked namesake and fellow Brazilian for a diving header that beat Fabianski at the far post.

A flare hurled from the away fans' section was cleared off the pitch and play resumed with Nketiah failing to make the most of a strong chance as Arsenal broke incisively.

Nketiah's wasteful afternoon continued as he sent his best opportunity yet wide of the right post, but the visitors had already done enough for the win in spite of West Ham's late endeavour.