Cork City remain three points clear at the top of the First Division table as they claimed a significant 4-1 victory against promotion rivals Longford Town at Turner's Cross on Friday night.

A Barry Coffey brace, a superb strike from Darragh Crowley, and an own goal were enough to see City come from behind to beat Longford, who opened the scoring through Sam Verdon

The victory keeps them three points clear at the top of the table. 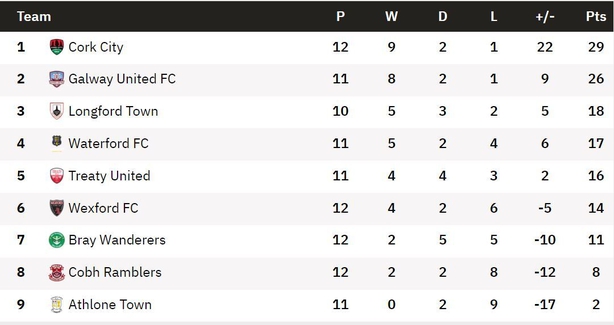 After a tame opening to the game, City twice went close to scoring from set-pieces but shortly after Ally Gilchrist sent his free header from close range over the crossbar.

Cian Coleman, who headed in the winner against Cobh, nodded wide of the near post following another great Matt Healy cross.

Longford ought to have taken the lead midway through the first half, but after David Harrington’s rushed clearance fell kindly to him, Eric Molloy’s first-time effort was too close to the goalkeeper and allowed him to make the save.

The lively Ryan Graydon saw a powerful strike easily saved moments later before City needed Jonas Hakkinen to turn a dangerous delivery from Darren Craven, who later suffered a knock and was replaced by Karl Chambers, across the face of his own goal and wide of the far post.

The game sparked into life when the first half was drawing to a close and it started with Cian Murphy driving a low shot straight at goalkeeper Luke Dennison when he was released by a great through ball from his strike partner Ruairí Keating.

It seemed like the Rebel Army would rue missing that chance as Longford finally broke the deadlock in the 43rd minute when captain Sam Verdon rose highest and headed Chambers’ excellent cross into the far bottom left corner of the net.

Their hard-earned advantage however only lasted four minutes as the Leesiders restored parity with a large chunk of good fortune as Kevin O’Connor’s low cross in behind the defence was turned inside his own far right post by Michael Barker.

Longford remained competitive but Verdon and Molloy couldn’t scramble the ball over the line from a few yards shortly after the restart for what was probably their best chance of the second 45.

That miss would prove decisive as City completed the comeback on 54 minutes when Coffey found the roof of the net as he drilled his volley into the ground as it fell kindly to him after good work from Cian Bargary.

The game remained in the balance until the closing stages and that was when Coffey grabbed his and his side’s second with a fierce hit after the ball again fell kindly to him inside the penalty area.

The goal of the game belonged to Crowley as he added a flattering look to the scoreline late on when his thunderous hit from distance crashed against the inside of the right post.

Elsewhere Galway United kept the pressure on the table toppers with a dramatic 3-2 comeback victory over Treaty United. Dean George's second goal of the night shortly after the hour mark gave the hosts a 2-0 lead, before Ronan Murphy got the visitors back into the tie with a quarter of an hour to go.

Five minutes later and Alex Murphy equalised before Stephen Walsh snatched all three points with a goal in the 87th minute.

Bottom of the table Athlone Town slumped to a 3-0 home defeat to Wexford, with Adam Wells, Daniel Corcoran and in the final minute, Jack Doherty on the mark. Athlone remain winless after 11 games.

The night's other game saw second-from-bottom Cobh Ramblers claim an away point against the side directly ahead of them in the table, Bray Wanderers.

The visitors drew first blood through Conor Drinan, but Kurtis Byrne ensured a share of the spoils at the Carlisle Grounds.