The Republic of Ireland's summer schedule has been rejigged to accommodate the World Cup qualifier between Ukraine and Scotland.

Ireland were set to open their UEFA Nations League campaign against Ukraine at the Aviva Stadium on 4 June, however, Stephen Kenny's side will now begin away from home, taking on Armenia on the same date.

Two home games will then follow against Ukraine and Scotland on 8 June and 11 June respectively, while the final game of the summer will see Ireland travel for the reverse fixture with the war-torn nation, with a venue yet to be decided in light of the ongoing conflict.

The away game with Ukraine is scheduled to take place on 14 June.

Scotland's World Cup play-off semi-final at home to Ukraine has been rescheduled for 1 June with the winners of that match facing Wales in Cardiff for a place in the finals in Qatar on 5 June. Whoever qualifies will be in a finals group alongside England, the United States and Iran.

An FAI statement read: "In light of the ongoing situation in Ukraine, the Group B1 fixture list has been rescheduled to accommodate the FIFA World Cup Play-Off fixture between Scotland and Ukraine which is now to be played on June 1, with the winners set to play Wales on June 5.

"The summer games will conclude with an away fixture against Ukraine on Tuesday, June 14, at a venue to be decided in consultation with the Ukrainian FA and UEFA.

"Both matches in September have been put back 24 hours with Ireland's away match in Scotland now taking place on Saturday, 24 September, as Scotland will host Ukraine in the Nations League on 21 September.

"The Nations League group campaign concludes for Ireland with the Aviva Stadium clash against Armenia on Tuesday, 27 September."

Kick-off times for all games will be confirmed at a later date.

"We held very productive and amicable talks with UEFA, FIFA and our fellow Associations this week and we are delighted to accommodate our colleagues in Ukraine with this rescheduling," said FAI CEO Jonathan Hill.

"The FAI and European football stand with the people of Ukraine and we look forward to welcoming them to Dublin on June 8." 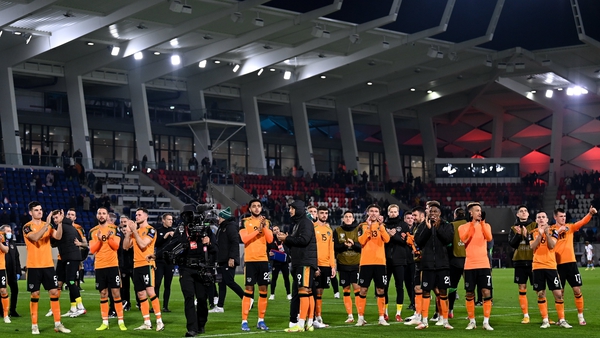 Ireland's clash with Ukraine set to be played at neutral venue