Trevor Croly rued his side's missed chances as Bohemians were beaten on penalties in the final of the FAI Cup by St Patrick’s Athletic.

After a stalemate 90 minutes, the game burst into life in extra-time as St Pat’s went ahead through Chris Forrester before Bohemians hit back in the second period with a wonderful Rory Feely headed effort.

And in truth, it was the Gypsies that looked more likely to win the game ahead of the dreaded penalty shoot-out, however, they were denied, first by a sensational Vitezslav Jaros save from Ross Tierney’s point-blank header, before Jak Hickman cleared another effort off the line at the death.

The Dublin 7 side were then forced to settle the game on penalty kicks and while they were momentarily in the driving seat as Forrester’s spot-kick was saved by James Talbot, Tyreke Wilson and Keith Ward both missed as the Saints took the cup.

"It’s hard to take," said Croly, who was tasked with managing the Bohs team in the absence of manager Keith Long, who was serving a suspension and had to watch from the stands.

"I think we had the better of the chances. Sometimes it’s the emotions of the game, and when you look back at it and analyse it, it can be slightly different, but it felt like we had the bigger chances in the game, but we didn’t take them.

"And then it goes to penalty kicks and unfortunately you lose."

Croly had to make adjustments to his side for the final 30 minutes of regulation as star striker Georgie Kelly, who was the league’s top scorer, had to come off.

And while Kelly’s absence left Bohs without their talisman for the remainder of the game, it also denied them one of their five penalty takers for the vital shoot-out.

"We felt [starting George] was the best way to go," said Croly. "He nearly scored before he came off, but he was gone, he was out of energy, he was empty at that stage. These are the decisions you make.

"Georgie is our regular penalty taker, and we knew it was highly unlikely he'd be on the pitch at that stage."

As for the positives that Croly can take from the disappointing defeat, the stand-in manager said that he believes that players will be motivated by the Cup final loss and it should auger well for the future of the Dalymount Park club.

"From my playing days, I can only remember the difficult days, disappointing days," said Croly. "They're the ones that spur you on, so we can use it.

"It doesn't feel like it could be a good thing at this minute, we're devastated, but you've just go to use it and use it as a motivational tool to go forward."

Croly and Long now have to attempt to assemble a strong squad to go again in 2022 and the club must also plan without the carrot of European football, having missed out because of their fifth-place finish in 2021 as well as the Cup defeat.

"That's the challenge for every team. That's what we try and do," said Croly. "You lose players and you get players in. It's becoming funny season, isn't it? We'll try our best. There's people out of contract and we'll try and keep them.

"Obviously, we'll try and keep the ones we want, and some players are going to have to move on. That's business." 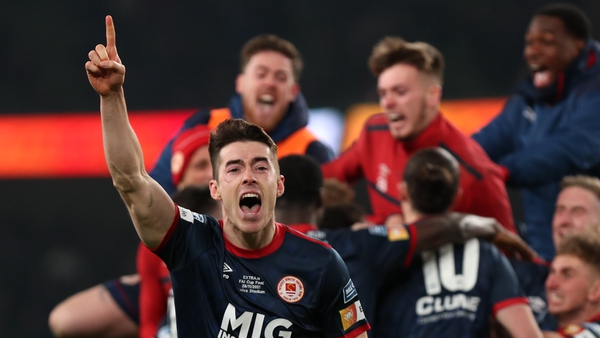