Republic of Ireland manager Vera Pauw says that her team need to reach the same level that they did against their World Cup 2023 qualifying group's big guns if they are to beat Slovakia this week.

Ireland look in contention for a play-off spot after a 1-0 defeat to likely Group A winners Sweden and 2-1 victory at second seeds Finland last month.

They host Slovakia, the highest-ranked fourth seeds in the competition, at Tallaght next Thursday and Pauw insists there can be no sitting on their laurels despite recent success.

"We need to play with the same intensity and level of approach as we did against Finland and Sweden," she told RTÉ Sport after her announcing a 25-player squad for the games against the Slovaks and Georgia.

"If we cannot do that then we will not win.

"We need to have more calmness on the ball. Our possession play can be very good and that's what we will stress, that we don’t give the ball away in our build-up. From there we need to find the gaps in the defence of Slovakia.

"They are a good team and we are in a very tough group. The second, third and fourth seeds are very close and their ranking doesn’t reflect their level of play.

"They’re very structured with a few players that can really make a difference so we have to be at the top of our level."

Finland 1-2 Republic of Ireland - Denise O'Sullivan has Ireland back in front, getting her head on the end of a Heather Payne cross

Ireland have impressed since ending a run of seven successive defeats - mostly against higher-ranked opposition - with a 3-2 win over Australia in September.

"We knew the path we were on," insists Pauw. "Every single game we got better, even though we lost.

"The Australia game, we fought to get it in because we know that was the moment, and it has brought us where we are now.

"But now we have to grow to play better when were' attacking and that’s a huge task but we are confident.

"If we manage to get the points this week then we’re on the right track and we can really aim to qualify for the play-offs."

Pauw will have a new assistant beside her next week as Tom Elmes replaces Eileen Gleeson, who has taken over as manager of Glasgow City.

"I chose Tom because of his level of reading the game and his coaching level," explained Pauw.

"He has coached Wexford and is now (Ireland) U16 coach and U17 assistant coach.

"He knows all the coaches and players in the (Women’s National) league. That’s what I needed. Losing Eileen and being in the middle of a qualification process, you need to be in touch with the base of the game here in Ireland.

"I’m very happy that we could convince Tom to come in." 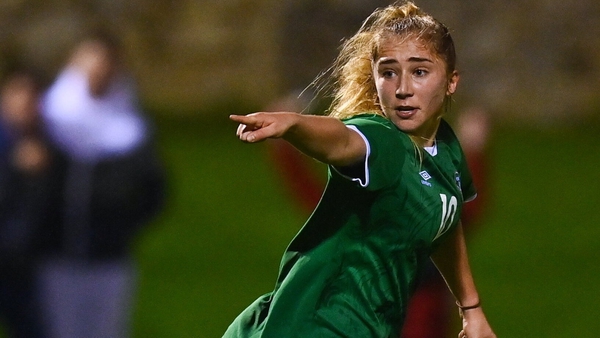 Molloy back in fold as Pauw names Ireland squad