ONLINE
Live blog on RTÉ.ie and the RTÉ News Now app from 7pm.

TV
RTÉ2 will have build-up and live commentary from 7pm, with presenter Peter Collins joined by Liam Brady and Richie Sadlier for analysis, and Darragh Maloney and Ronnie Whelan describing the action from the Grand Duchy.

VENUE
The recently completed Stade de Luxembourg, situated in the Gasperich quarter of Luxembourg City, will play host to this concluding qualifier. With a capacity of 9,386, it is the largest stadium in the country. The FAI were allocated 1,000 tickets back in September and you can expect that number of Irish fans to be present.

So far the hosts have played three games at their new home, beginning with a 2-1 win over Azerbaijan. That was followed by a 1-1 draw against Qatar and a 1-0 loss to Serbia.

WEATHER
It's expected to be dry and cloudy for the game. Maximum temperatures on Sunday will be 10 degrees, dropping to 4 or 5 come evening time.

Luxembourg are three points to the good and know that a draw will see them remain in third spot. Because of Ireland's superior goal difference a win of any sort will see them move up a place.

You have to go back to the 2014 World Cup qualifying campaign for the last time an Irish team finished fourth in the standings. Giovanni Trapattoni got his marching orders with two games still to play. The cat was well and truly out of the bag at that stage!

SOME MEMBERS OF THE JURY ARE STILL OUT

Did we ever think that the game against Luxembourg would have so much riding on it? Even before a ball was kicked against Portugal, this was the game that had more riding on it for Stephen Kenny and co. This is the game, against an improving Luxembourg side away from home, that would be more of a barometer. Perhaps.

But Kenny's Ireland have found a bit of momentum since that March night when Gerson Rodrigues found the corner of the net. Cries of 'we shoudn't be losing to Luxembourg' were echoed loudly. A certain lack of realism you would have to say, given Ireland's position on the footballing ladder. The Luxembourg FA, in recent years, have taken pro-active steps to improve the state of the game.

The aforementioned Rodrigues was on the books of Dynamo Kyiv when he scored that winner at the Aviva. He has played in the Champions League and is now out on loan with French Ligue 1 side Troyes. Another player of note is Leandro Barreiro, who plays in the Bundesliga with Mainz. Luxembourg are no longer the whipping boys.

A win over the Irish would cap off a productive campaign and have them eyeing more progress in the Nations League and Euro qualifiers.

But back to Kenny. It's one loss in nine games since that setback on 27 March. Okay, the opposition in many of the games offered little resistance, but Ireland are now pleasing on the eye. Against Portugal, there was no little aggression to suggest that the 'Kenny Project' can also be an awkward opponent. Ireland were disciplined and well organised in containing a Portuguese side that, nevertheless,were short a few regulars.

In Chiedozie Ogbene, a player who was not on the radar of most fans a few months ago, Kenny's philisophy of giving youth its chance is reaping dividends. Matt Doherty always plays well for Ireland these days; a testament to Kenny's man management. The squad as a whole, and it's not a dutifully practice, seem to be behind the gaffer.

But is everybody? Liam Brady, on RTÉ television after the Portugal game, says the FAI should should wait even longer before giving Kenny an extension.

"I think he's doing a pretty good job. Whether he's the man to take it forward, nor not, I think we should wait before we make that decision.

"Why should we make the decision now? He's got another eight months to run on his contract, so why don't we wait?

"The FAI have a chance to assess him even further. We've done it too often in the past, given out contracts and then it has backfired on us.

The word out there is that a number of senior figures on the FAI board are also in no rush to make a call now on Kenny's future.

Would a comprehensive 3-0 win away to Luxembourg change their mind? We don't know. But three points in the Grand Duchy would cap off a campaign that for a while looked very bleak for the former Dundalk manager.

WHAT TEAM CAN WE EXPECT?

Andrew Omobamidele, who was ruled out of the Portugal game, has travelled and his fitness will be assessd prior to kick-off. Peterborough United midfielder Jack Taylor gets a call up in place of Jayson Molumby, who was ruled out with injury earlier this week.

Will it be a case of ther tried and trusted from Thursday or will Adam Idah get a chance to lead the line in place of Jamie McGrath? Omobamidele could come into the reckoning in defence if he is fit. 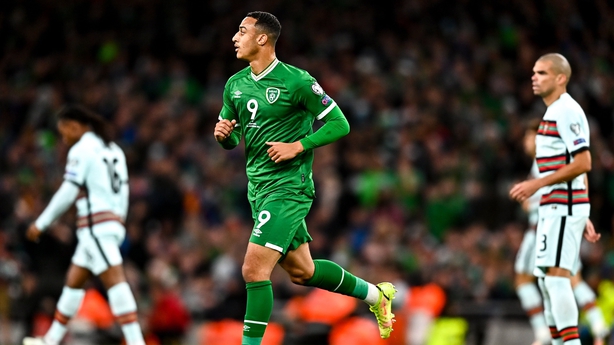 Kenny won't tinker too much, you would have to say, and on Omobamidele featuring, he said: "We're confident that he'll be fit I think. We'll see how he goes."

"In the last matches, they played more with the style that they played for 100 years. It was more British style, this fighting spirit, more long balls, more contacts. I think Ireland are in good shape."

Stephen Kenny replied during Saturday's pre-match press conference, saying: "I don't really have any reaction. Anyone can say anything," but added of the remarks that "it's certainly not accurate".