Stephen Kenny has challenged his team to end a disappointing World Cup qualifying campaign in style with victory in Luxembourg to cement their ongoing improvement.

After a creditable 0-0 draw against the group favourites - a result which means they've only lost one game in the past nine - Ireland now head for Luxembourg knowing victory will secure third place, no major prize, but a sign of progress after a difficult start to qualification.

Kenny told reporters afterwards: "From my point of view, I know there's nothing in it in terms of it doesn't help us in the European Championships, it doesn't affect the seeding or anything like that, but from a personal pride point of view, apart from the 97th-minute goal that Ronaldo got, it's nine matches with one defeat.

"We look defensively better now, we're not giving up many chances and three clean sheets in the last three games, so of course we want to go to Luxembourg and win, of course we do.

"But tonight is about tonight and tonight, I thought, was of a very, very high standard technically for 65 minutes, maybe and a good defensive display for 90 minutes."

Ireland kept Cristiano Ronaldo relatively quiet, as they had for most of the game in Faro, though the Manchester United superstar had a glorious opportunity to nod home the only goal midway through the second half, his header grazing off the post.

But they did have the ball in the net deep in injury-time, however Matt Doherty's strike was chalked off after referee Jesus Gil Manzano deemed Will Keane to have fouled Portugal goalkeeper Rui Patricio in the lead-up. While the whistle was clearly audible before Doherty scored, Kenny was aggrieved at the call.

"It's clearly not a foul," Kenny told RTÉ Sport. "Will Keane stands his ground. The goalkeeper is the proactive one. Any barging that's being done, he is (doing it).

"It's a clear goal that's been disallowed so it's very disappointing that it's not been given."

Pepe's late sending off after tossing a loose elbow in the direction of Callum Robinson teed up a high-octane finish in which it was the hosts largely pressing for a winner.

However, Kenny believes that Ireland were the better team for the entirety of the second half, even before the numerical advantage kicked in.

The clean sheet is Ireland's third on the trot and was achieved with a back three in which Everton full-back Seamus Coleman partnered Shane Duffy and John Egan.

Kenny said: "I know Callum [Robinson] got man of the match - I'd have probably given it to Shane Duffy on his performance. Probably technically, it's the best I've ever seen him play in terms of his range of passing, and the quality and weight of his passing was really, really good.

"I know he's always been a good defender, but... and I thought Seamus was very, very good, and John Egan. The back three collectively were excellent." 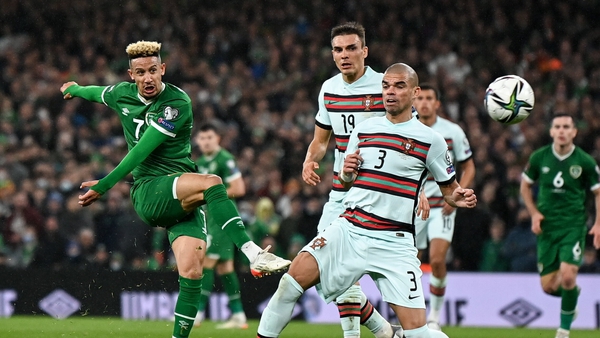