An emerging star at the Manchester United academy during the glory days of the Alex Ferguson era at Old Trafford, it is hardly a surprise that an underage international call-up would present itself for Will Keane.

It was the roar of the Three Lions that would entice the striking prospect into the international fold, however, as the Manchester-born Keane would go on to represent England from Under-16 up to Under-21 level.

A serious injury sidelined the United hopeful at a time when he was looking to break into the first team, and a run of loan moves eventually saw Keane sign for Hull City in 2016, before moving to Ipswich and on to Wigan, where he is currently helping the Greater Manchester side in their push for promotion to the Championship.

It has been over two years since the now 28-year-old declared for Ireland, however, he only received his first call-up to the squad for the recent games against Azerbaijan and Qatar.

Yet to make his international debut, Keane is anxious to get going in the green of Ireland and will be hoping to get some game-time over the next week as Ireland first face Portugal on Thursday before finishing the World Cup campaign in Luxembourg on Sunday.

"It first came on the radar a few years ago, under Mick McCarthy. That's when I declared for Ireland, I think he was considering me for selection then," said Keane.

"Since the start of this season, the manager has been coming to the games and has been watching me, with James [McClean] being a regular.

"He kept an eye on me and I was delighted to be included in the recent squad, and I’m looking forward to more."

While Keane was making his way through the England ranks, twin brother Michael – also coming through the Manchester United academy – answered the call to represent Ireland and played in green at Under-17 and Under-19 level. Michael, currently at Everton, would eventually do an international U-turn and represent England at senior level.

The Keanes' father hails from Sligo, and while Will said that he played for England as they were first to approach him, as he got older he explored the possibility of playing for Ireland.

And now as part of a second successive Stephen Kenny selection, Keane admits that he feels a strong sense of honour getting a chance to play for the country and make his father proud.

"My Dad’s Irish, he was born in Sligo," said Keane, when asked why he decided to declare for Ireland. "He was raised there and was actually an orphan. He went to boarding school and was adopted, and moved to England when he was ten.

"When I was a younger lad I was approached by England first, and played in the youth age groups there. I was living there and that seemed to be the thing to do at the time. Then further down the line when I got the opportunity to come here it was something I really wanted to do.

"Unfortunately, my Dad lost touch with his roots, for obvious reasons as he was given away as a child, but to sort of reconnect with that and have the opportunity to represent Ireland is a massive honour and something I’m really proud of doing."

Keane admits that he was nervous coming into the squad but acknowledged that arriving with the McClean seal of approval certainly made things a lot easier.

McClean and Keane are both currently playing with the League 1 table-toppers and the Derry native convinced the striker that he would fit right in with the boys in green.

"Coming into the first squad, I was a little bit tentative," said Keane.

"But someone like James McClean has great experience, he said I’d settle into the squad and be made welcome regardless.

"You won’t get anyone more patriotic than James. He lives and breathes Ireland and is a great professional as well. Personally, seeing him come into Wigan, he sets his standards high and other players follow that. He’s a great person to have around the place.

"When he first heard that the manager was looking at me, he was telling me how much of a great experience it would be to represent the country. That made me want to achieve it even more.

"And it has felt like that. Like everyone else, I’m just wanting to do whatever I can to contribute to the same goals. I’m looking to give my all, whichever way I can."

Looking ahead to Portugal on Thursday night, Keane would love to make his international debut in front of a packed stadium, and the striker is hoping that his father is one of the contingent at the Aviva.

And the new man in green believes that the occasion would prove the perfect family affair and allow his dad reconnect with his Irish heritage.

"He is massively [proud]," said Keane. "Because of the circumstances, he hasn’t stayed in touch with his family, so for him to reconnect with that is a massive thing, so he’s really proud.

"For me to give him that gives me a lot of pleasure.

"I'm not sure yet [if he'll make it]. He came over for the Qatar game. I'm waiting to get confirmation but hopefully." 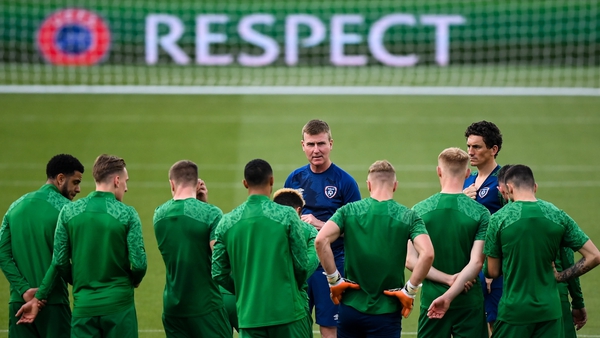