Mohamed Salah scored a hat-trick as Manchester United were ripped apart by relentless rivals Liverpool to leave Ole Gunnar Solskjaer under the most intense scrutiny of his near three years in charge.

The 202nd meeting of two of English football's biggest rivals will live long in the memory after Jurgen Klopp's men ran amok and recorded the club's biggest ever win at Old Trafford.

Liverpool were as impressive as United were poor, with scintillating Salah's treble complementing early goals from Naby Keita and Diogo Jota in a 5-0 rout in which substitute Paul Pogba was sent off.

Alex Ferguson was seen shaking his head in disbelief after the fifth goal, with the visiting fans chanting Solskjaer's name during an embarrassing display that will test the Old Trafford hierarchy's support of their manager.

Never before in Premier League history had United gone into half-time four goals behind, but their consistently poor defence was punished by Liverpool as Keita and Jota scored before two Salah strikes.

A cacophony of boos met the half-time whistle and the Egyptian magician completed his hat-trick five minutes after the restart, with Pogba's red card for a poor tackle on Keita compounding matters.

Liverpool were unable to add anymore and Cristiano Ronaldo saw a goal ruled out for offside in a second half that ended with empty seats and jeers, 10 years and a day since the 6-1 home loss to Manchester City. 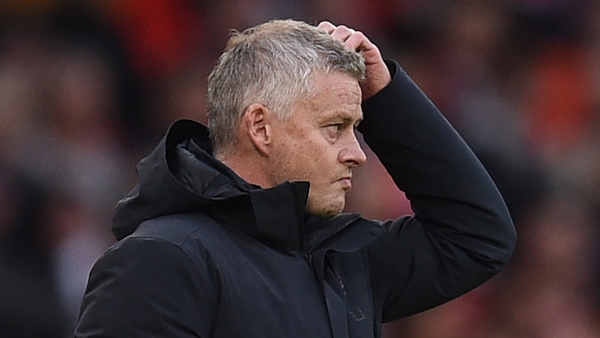