Dundalk manager Vinny Perth hailed his team's togetherness and touted the importance of the Oriel Park crowd after his side's vital 2-1 win at home to Bohemians in the SSE Airtricity League Premier Division.

Three days after crushing Sligo Rovers 4-1, Perth's side recorded a second successive home victory to clamber above Waterford, lifting themselves out of the relegation/promotion playoff spot in the process.

It's a timely burst of form for Dundalk, who'd endured a miserable six-game winless run throughout August and early September, the nadir arriving with their 1-0 loss to First Division-bound Longford Town.

Goals either side of half-time from Sam Stanton and Pat Hoban helped Dundalk to victory and they survived a late Bohs surge after Tyreke Wilson had pulled one back for the visitors.

"We got the goals at the right times," Perth told RTÉ Sport after the game. "We had to dig in a bit. That goal late really hurt us and gave them huge energy. That Bohs side are exceptional.

"But other than set-pieces, crosses and long balls, I thought defensively, we were set up soundly tonight.

"We have people coming off their sick beds. Andy Boyle hasn't trained in seven-eight days and he came in and showed real leadership. And it was a great night for Pat Hoban again. He's one of the great all-time League of Ireland goalscorers. Great night for the real leaders in Pat and Andy." 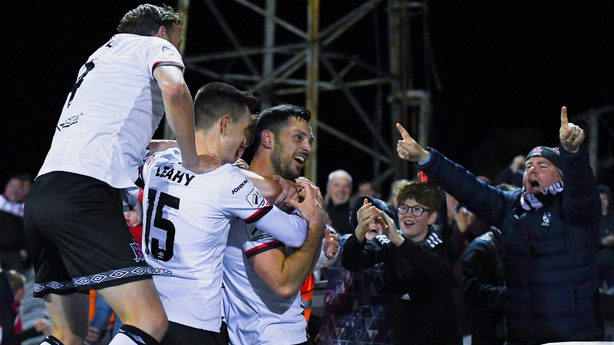 Perth didn't quite accept the notion that the 'real Dundalk' were returning, arguing that his side had actually coped reasonably well in difficult circumstances over recent months – while battling Covid issues and injuries.

"If you've watched us – and watched us in the right way – we haven't had a bench and we've had a lot of stuff go against us in the last two months but we've played really, really well at times.

"The bit of luck and momentum hasn't gone our way. Ironically, we've played better than we did tonight in some of the games that went against us.

"We were so hurt with the injuries and the sickness and the Covid issues that we've had. It's for other people to laugh and sneer but as a group, we've stuck together.

"When you're good to the game, the game is good to you. Maybe, we got a bit of luck in injury time."

In particular, Perth was quick to play up the impact of the Oriel Park crowd and suggested that Dundalk had perhaps suffered more than most due to the absence of supporters.

"I've been saying that for a long time, back when the pandemic started. This is a bleak ground, I accept that. It's not the best ground in Ireland, by any stretch. And when there's no one here, it's difficult. It doesn't motivate you. That's not an excuse for the players or the management.

"To be fair to Jim when he managed here, to be fair to Fillipo, it's really difficult to motivate players when it's a sunny day and there's no one here. Other grounds are better and lend themselves to that. I think that went against us.

"This place is an amazing venue when the lights are on and there's 2,500-3,500 people in and they showed that tonight, they really got behind the team."

As for the issues the club have been battling – between Covid and general ill-health – Perth is hopeful they're over the worst and can now properly attack the rest of the season in league and cup.

"We live in a border town. Some of our players live in Belfast, some of them have family in Derry as well. When you look at Ireland and the UK, they're the hotspots. We're living in that and it's part of sport as well. We just hope that that passes. We've still got players missing.

"It's a personal health issue, I haven't discussed who had Covid other than the players discussing it themselves. We didn't have as many Covid cases as people thought. We have a bit of sickness in this camp. Hopefully that passes.

"We've got a huge tie up in Richmond Park against a Pat's side that's going really well.

"We need a bit of strength in depth back if we're going to be successful between now and the rest of the season, when it comes to a trophy.

"The FAI Cup is the holy grail. Everyone wants to win the league but there's only two trophies given out this year. We're in with a shout for one despite all the noise around the club.

"When we get our best team on the pitch, we're more than a match for most in this league."