Injury-hit Dundalk travel to face Sligo Rovers tonight for a re-arranged SSE Airtricity Premier Division match in the Showgrounds, knowing they are in desperate need of points.

The match was scheduled for July but was postponed when the Lilywhites reached the third round of the Europa Conference League.

Such heights seem a long time ago now as a run of one point from a possible 18 has put Vinny Perth's side firmly in the relegation mix.

Defeat in this game would hammer home the genuine prospect of a ninth-place finish and the play-off to avoid the drop.

Perth has bemoaned the injury problems which have struck at Oriel, while the club also trimmed their high wage bill in the window.

Eight players will be unavailable for Dundalk tonight due to injury and suspension. Patrick McEleney, David McMillan, Brian Gartland, Wilfried Zahibo and Darragh Leahy remain on the injury list, where they are joined by goalkeeper Cameron Yates.

He made his first start in the 1-0 loss to Longford last Saturday.

Han Jeongwoo and Daniel Cleary also miss out through suspension 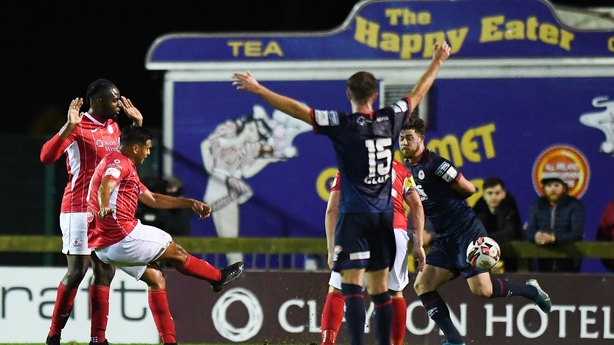 It was also a miserable two months for Liam Buckley’s charges after they exited the Europa Conference League, FAI Cup and also lost four league matches in succession.

But the victory in front of the RTÉ cameras over Pat's lifted the mood last weekend.

Shane Blaney (foot) is the only confirmed absentee for Sligo for this game, with Rovers set to have the same squad as last weekend.

Bit O'Red manager Liam Buckley said: "It was a difficult game on Friday and one we did well in. It was important to get the win with our objective of qualifying for European football for next season.

"It’s still our objective and that was just one result in trying to achieve that target. We’re going to need to keep picking up points because of all the teams fighting it out.

"I was at Dundalk’s game in Longford and while I know they are down a lot of players, their overall squad is big and when you look at the team they can put out, it’s still filled with top-quality players. As we know in this league, every game is so well contested and anything can happen. From our point of view it’s about application and building on the win last week."

Dundalk centre-half Andy Boyle is adamant that they cannot let their heads drop despite the misfortune of injury and the manner of the loss to Longford.

He added: "It was disappointing to lose on Saturday. We created a lot of chances but we just didn't get the breaks. It’s frustrating for us and that is just the way we have been.

"We knew it was going to be tough with the amount of bodies that we are missing but we aren’t making excuses for it, we are just getting on with it. We want to get back to winning ways.

"It’s going to be a difficult game for us in Sligo. They are having a good season and had a good win the other night against Pat’s but hopefully we can turn it around and come away with a win."