Stephan El Shaarawy's stoppage-time goal gave Jose Mourinho a victory in his 1,000th game in management as Roma edged out Sassuolo 2-1 in Serie A.

Mourinho pulled out a classic celebration, sprinting down the touchline after El Shaarawy lifted the ball over Sassuolo goalkeeper Andrea Consigli.

Bryan Cristante had put Roma in front after 37 minutes but Filip Djuricic cancelled it out just before the hour.

Zlatan Ibrahimovic wasted no time on his return from four months out through injury, scoring to help AC Milan to a 2-0 win over Lazio as he added to Rafael Leao’s first-half strike.

But rivals Inter dropped their first points of the season as they were held to a 2-2 draw away to Sampdoria, who got goals from Maya Yoshida and Tommaso Augello to wipe out strikes from Federico Dimarco and Lautaro Martinez.

Mohamed Fares’ late brace helped Genoa come from 2-0 down to win 3-2 at Cagliari, while Lazar Samardzic struck at the death in Udinese’s 1-0 win away to Spezia.

Torino cruised to a 4-0 win over Salernitana. 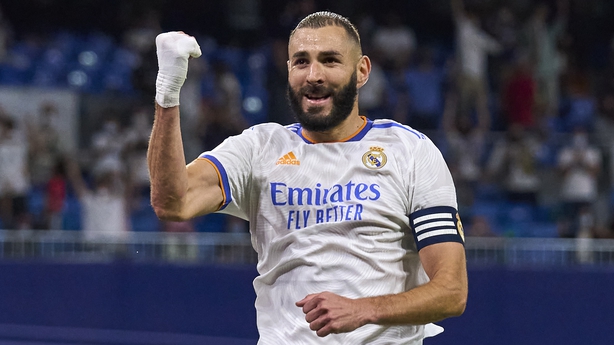 Karim Benzema scored a hat-trick as Real Madrid twice came from behind to beat Celta Vigo 5-2 in LaLiga.

Santi Mina capitalised on poor defending to put the visitors in front just four minutes in, and though Benzema equalised they were back in front thanks to Franco Cervi’s goal just after the half hour.

But Benzema levelled again at the start of the first half, then added the fifth from the penalty spot after goals from Vinicius Junior and new signing Eduardo Camavinga.

The hosts took a surprise lead five minutes before the break through Raul de Tomas' looping header, with Atletico labouring until Yannick Carrasco struck a leveller 11 minutes from time.

But with Espanyol guilty of time-wasting and two lengthy VAR reviews leading to plenty being added on, Lemar fired beyond Diego Lopez at the death for three points that take defending champions Atletico to 10 from their opening four games.

Valencia also needed to come from behind but did so in convincing style as goals from Maxi Gomez, Aridane Hernandez, Goncalo Guedes and Omar Alderete earned them a 4-1 win at Osasuna.

Real Sociedad won 2-0 at Cadiz thanks to a late brace from Mikel Oyarzabal, the second a penalty after Cala saw red for the hosts.

Hertha Berlin got their first Bundesliga points of the season as Suat Serdar’s first-half double helped them to a 3-1 win at Bochum.

Late goals from Kasper Dolberg and Amine Gouiri saw Nice win 2-0 at Nantes to move up to fourth in Ligue 1.

Angers, second after a strong start, dropped points for only the second time this season as they were held to a 1-1 draw at Brest.

Lyon eased to their second win of the season, beating Strasbourg 3-1 with goals from Moussa Dembele, Jason Denayer and Lucas Paqueta before Habib Diallo got a late consolation goal from the penalty spot.