Shamrock Rovers manager Stephen Bradley said his team "couldn't have done much more" in their 1-0 loss to Bohemians in Dalymount Park - aside from taking the chances that fell to them.

Georgie Kelly's 56th minute strike was enough to deliver Bohs victory in the derby, lifting them to fourth in the table after four wins in their last five games.

Hoops boss Bradley praised his side's performance and insisted they showed no ill-effects from the quick three-day turnaround after the win in Waterford but lamented their inability to convert their chances, especially in the first half.

"It's disappointing because the game should be over at half-time," Bradley told RTÉ Sport's Tony O'Donoghue after the game.

"We have four really good chances, we hit the crossbar. We didn't take them.

"They had one shot in the game and they win the game. There was no threat in the game from them. But we didn't take our chances and we got punished.

"In the second half, I think their goalkeeper is their best player. I think that tells the story. He makes a great save off Danny (Mandriou) at the end there, two (saves) off Rory (Gaffney) and Rory hits the crossbar.

"It was one of those nights. We couldn't have done much more. Other than score the chances we created. Obviously, they have one chance and they score and that's the way it goes. You don't take your chance, you're always liable to drop points.

The Bohemians striker finishes an outstanding team move to give his side the lead in the Dublin derby ??

"If you look at the performance, look at the chances we created, really happy with that aspect, just disappointed we weren't ruthless."

Following the loss, Bradley's side have slipped to second in the table, although they only trail St Patrick's Athletic on the basis of goals scored, both holding an identical points tally and goal difference.

It's a third defeat in 2021 for the reigning champions after going unbeaten in the shortened 2020 campaign.

"Retaining leagues are never easy," says Bradley. "We know that we have a challenge but it's fine. This group have lost three in 40-odd games. They were very good tonight, didn't take our chances, get punished. It happens, it's football. We move on and get ready for Friday."

For Bohs manager Long, the match-winning goal, the product of a slick passing move, was typical of the attacking football his side have produced this season.

"It was a well-worked move and it reflects some of the goals we've scored this season," the Bohs manager told RTÉ Sport.

"We've scored some team goals, building from the back through the thirds with some good, fast, forward attacking football.

"Georgie got four on Friday for us (against Drogheda) and finished with aplomb for us tonight. Really pleased for him, he's taken a bit of stick this year but he's come up trumps tonight, getting three points in a derby for us.

"We're on a decent run and it'd be nice to keep that going. Obviously, we've got to go to Sligo on Saturday and that's a tough place to go at the best of times.

"The important thing is that we enjoy tonight and we enjoy the victory in a derby and that's important too. Because when you win, you have to try and enjoy the moment. But it's getting back to work tomorrow evening and re-focusing and making sure we're prepared as well as we can for Saturday."

The Jodi Stand welcomed back 100 supporters tonight and, while spaced out, they succeeded in making a hell of a din following the game's only goal.

"There's brilliant energy coming from the crowd," says Long. "We've missed them, there's no doubt about it. Everybody has missed football supporters in stadiums around the world in every league. Sport is not the same without supporters.

"They were a big addition to us tonight. They helped the team, particularly in the last 10-15 minutes when there's tired bodies. We had a goal lead, we had something to hang onto. After the goal, Shamrock Rovers came into it for a couple of minutes and they tested James Talbot once or twice.

"But after that, I think it was quite comfortable. Although it was backs-to-the-wall a little bit, they didn't really have any clear-cut chances.

"But really pleased to give the supporters something to cheer about tonight."

While the two managers may have had a different spin on how the game panned out - specifically the extent to which one team was dominating the other - but agreed on the importance of the return of fans.

"Football is better for fans and having fans in stadiums," acknowledged Bradley, "So, the sooner the better we can get more fans back in every ground around the country, it's only good for the league and for football. 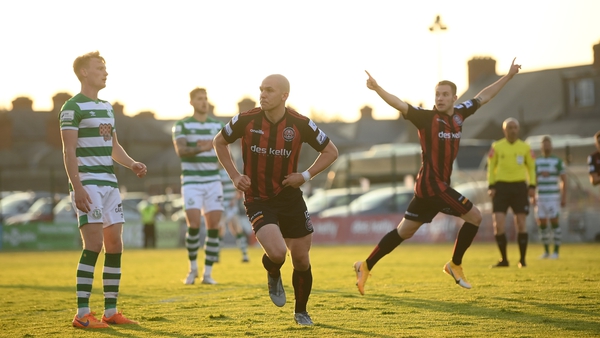