Pep Guardiola says Manchester City's shock collapse at Brighton is a wake-up call ahead of the Champions League final and demonstrates the difficulty of winning the Premier League.

City, who face Chelsea in the European showpiece a week on Saturday, blew a two-goal advantage to lose 3-2 on a raucous evening on the south coast.

Almost 8,000 jubilant Albion followers were treated to an unforgettable occasion at the Amex Stadium as second-half finishes from Leandro Trossard, Adam Webster and Dan Burn completed a sensational turnaround.

Despite having Joao Cancelo sent off just 10 minutes in, the visitors led 2-0 thanks to an Ilkay Gundogan header and a superb Phil Foden goal, prior to the unexpected capitulation.

City boss Guardiola, whose team will lift the Premier League trophy after hosting Everton on Sunday, says the uncomfortable experience provides plenty to work ahead of arguably the biggest game in the club's history.

"Eleven against 11 against Brighton is tough, 11 against ten is difficult so we have to improve for the final," said the Spaniard.

"Unfortunately after 2-0, we conceded a goal so quick and after they push a lot, we were more tired and could not keep the ball as much as possible, we could not do it and unfortunately we lost the game – congratulations Brighton. 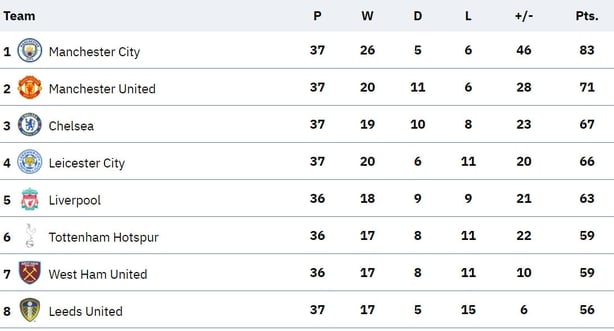 "I am concerned because this is the final of the Champions League, because the opponent is so tough.

"I saw incredible things today in the pitch with 11 against ten for 80 minutes in the Premier League.

"We are fortunate to lift the (Premier League) trophy and we did it ourselves. Nobody gave us absolutely anything; nothing.

"That’s why I am so proud of the team; it means how difficult is the Premier League again, and now we’re going to prepare as best as possible for the final of the Champions League."

City were on course for a 13th-successive top-flight away win after Gundogan nodded the early opener but the momentum swung ten minutes in when Cancelo was dismissed for denying Danny Welbeck a goal-scoring opportunity.

Foden’s fine individual effort doubled the advantage just after the restart but an error from Rodri allowed Trossard to swiftly halve the deficit and defenders Webster and Burn added further punishment.

Influential stand-in skipper Gundogan, who claimed his 13th Premier League goal of the campaign, went off injured in the second period, although Guardiola remains hopeful the issue is not too serious.

"We are going to check tomorrow," said Guardiola.

"The doctor is quite optimistic. The problem is a kick and he was running in the second half with disruption and I didn’t want to take a risk."