Tottenham strengthened their European qualification hopes with a win over Wolves which moved them into the top six.

Harry Kane opened the scoring with a goal that advanced his chances of winning the Premier League Golden Boot and Pierre-Emile Hojbjerg doubled the lead after the break.

It was Kane's 22nd goal of the season, taking him back in front of Liverpool’s Mohamed Salah in the race for a prize he has won twice before, while he also hit the post twice.

Spurs can still mathematically make the top four, but Europa League qualification is looking much more likely and a sixth-placed finish is in their own hands with two games to go. 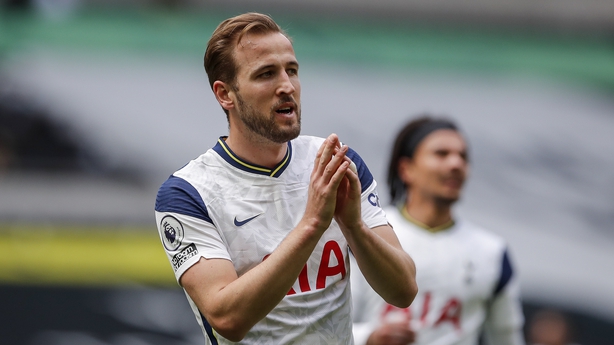 Wolves' campaign is petering out and this loss condemned them to a bottom-half finish for the first time since their return to the top flight.

Surprisingly, Kane had yet to score since one of his best mates Ryan Mason had taken temporary charge but he was on a mission to put that right from the off.

In the fifth minute he was cursing his luck again as he struck the post with an effort from distance. It was the eighth time he had been denied by the woodwork in the Premier League this term – more than any other player.

Still with something to play for, Spurs were the better side and Wolves' goal was under regular threat.

Gareth Bale tested Rui Patricio with a wobbling free-kick from distance while Son Heung-min stung the Portugal goalkeeper’s palms with an attempt at the far post.

Kane then had a header cleared off the line by Conor Coady, who seconds later produced another heroic block from Giovani Lo Celso.

But Kane can only be kept at bay for so long and he struck in the 45th minute. 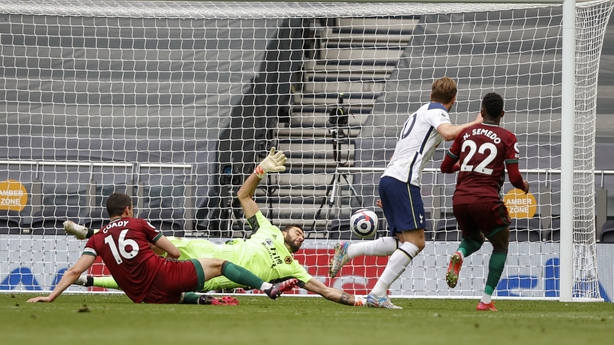 Hojbjerg’s pass set him clear and there was little doubt about the outcome – bar a VAR check for offside – as he expertly delayed his finish to fox Coady and Patricio before rolling into an empty net.

With Gareth Southgate watching, Dele Alli seemed determined to remind the England manager of his talents and it was a good piece of play that almost saw Spurs double their advantage.

He won back possession and then fed in Kane, who hit the woodwork for the ninth time as Patricio superbly tipped onto the upright.

That gave Alli the chance to get on the scoresheet as the rebound fell perfectly for him, but his first-time shot struck the other post.

Tottenham deserved their second goal, and it arrived in the 62nd minute.

Left-back Sergio Reguilon’s determination saw him win the ball high up the pitch, Son teed up Bale, whose first-time shot was parried by Patricio but Hojbjerg made no mistake from the rebound.

Wolves should have reduced their deficit soon after but the disappointing Fabio Silva dragged a shot wide from an inviting position while Adama Traore also shot wide after dancing into the area.

Spurs saw the game out safely as they prepare to welcome their fans back into their game with Aston Villa on Wednesday.

Alli told Sky Sports: "We dominated from the start. We played well. They gave us a few problems but we managed it well and when we went 1-0 up we knew it was important to get the second goal.

"We are not happy with where we are in the league. The ability we have in the squad we should definitely be higher up and we only have ourselves to blame.

"We are showing what we can do as a team but it is a bit too late. We have to finish as strongly as we can and work hard in the off-season and take it into next season."