Roy Hodgson’s side trailed twice through John McGinn and Anwar El Ghazi, but a spirited second-half rally saw the hosts recover to earn the victory.

Christian Benteke’s initial leveller was followed up by goals after the break from Wilfried Zaha and another academy graduate in Mitchell, who bundled in with six minutes left to earn all three points.

Both sides made changes with little to play for and Jack Butland was handed a surprise start in goal by the hosts for his first Premier League appearance in three years.

Jack Grealish remained on the bench for Villa, who were missing Tyrone Mings and Matty Cash, and it was the visitors who started the brighter in the capital.

Jacob Ramsey and Kortney Hause missed decent chances before Ollie Watkins was denied by Butland after a quarter of an hour and eventually the opener arrived with 17 minutes played.

A weak clearance from stand-in Palace captain Gary Cahill presented the Villa skipper for the day McGinn with the ball and the Scotland international curled into the bottom corner with expert precision.

The Eagles responded well to going behind and recalled pair Jeffrey Schlupp and Andros Townsend tested Emi Martinez while other opportunities were squandered before a former Villa player came back to haunt his old club.

Palace left-back Mitchell produced a fine chipped cross into the area and Benteke needed no invitation to head back across goal and into the corner for a 32nd-minute leveller. 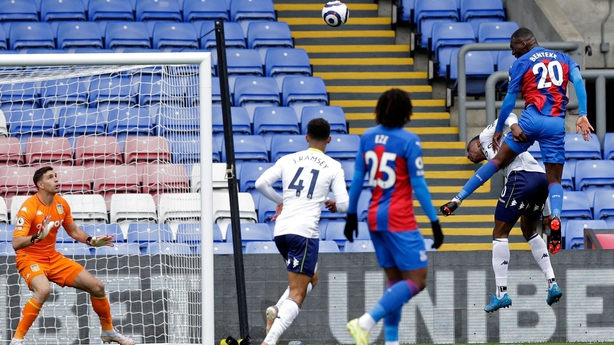 It was the Belgian’s ninth of the season and the third game in a row he had found the net, but parity would not last long.

Dean Smith watched Watkins again be a nuisance and his flick header was perfect for El Ghazi to drill in from close range two minutes later after defender Joel Ward had been attracted to the ball.

A heavy touch from Martinez almost gave Palace a chance 30 seconds into the second half, but Benteke failed to profit from it.

The duo were involved again before the hour mark when the goalscorer was denied a second by a fingertip save from the Villa custodian, with the crossbar also required.

Grealish was summoned by Smith with 26 minutes left and one of his first major contributions was to deflect a fierce effort from Ebere Eze wide.

Palace were pressing for a second leveller and while the arrival of centre-back James Tomkins on the pitch raised eyebrows, Hodgson also tweaked their formation following the substitution to a 4-4-2 and it paid dividends.

Zaha, who had been wide left, was now in the middle and drifted away from his marker to control a pass by Eze. After he worked a yard of space, the Ivory Coast international saw a shot deflect off Ahmed Elmohamady and beat Martinez.

It was the attacker’s 11th goal of the campaign – a new personal best – and ensured he remain two clear of nearest challenger Benteke as the club’s top scorer.

With the game wide open now, Eze came within inches of the winner in the 82nd minute when he smashed an effort against the crossbar, but the third goal for Palace did arrive two minutes later and via an unlikely source.

After Zaha got to the byline and saw his cut-back only partially cleared, Eze’s shot into the ground was bundled in by the shoulder of Mitchell, who opened his account in professional football and earned the hosts a comeback victory.