Steven Gerrard's Invincibles smashed through the 100-point barrier for the first time in Rangers’ history as the champions kicked off their trophy-day celebrations in style.

A 4-0 win over Aberdeen – earned thanks to a Kemar Roofe double in between Joe Lewis’s early own goal and Jermain Defoe’s late fourth – ensured an undefeated campaign.

But the match was merely a distraction ahead of the main event.

Thousands of fans locked outside Ibrox were really waiting for the moment when skipper James Tavernier finally lifted the trophy the club have waited a decade to recapture.

It was met by a barrage of fireworks as the Light Blues faithful lit Glasgow up in red, white and blue.

It has been a momentous, record-breaking season for Gerrard and his team, who have finished a monstrous 25 points clear of Celtic.

Victory over the Dons not only wrapped up a perfect 100% home record in the league, but also saw them write a number of new entries in the history books.

They have now set a new Scottish clean sheet record with their 26th shut out, and the 13 league goals they have conceded this term is also a record low – beating the previous benchmark of 15 set by Jose Mourinho’s 2005 Chelsea side.

The throngs outside Ibrox ignored warnings from the club, police and the Scottish government to stay away from the stadium.

The champions needed only five minutes to take the lead. Ianis Hagi clipped a tidy ball out to Tavernier on the right-hand side.

The skipper’s cross took a big deflection off Dons youngster Jack MacKenzie before Lewis’s attempted punch to clear went all wrong, with the ball flying backwards off his fist and into his own net.

Connor Goldson almost marked racking up 5,000 consecutive minutes of action this term with a goal, heading wide from a corner.

Aberdeen are still getting the hang of Stephen Glass’s new methods. It is taking a bigger adjustment for some more than others, as demonstrated when Lewis knocked a goal-kick straight out for a corner as one attempt to build from the back bombed.

But they were unlucky not to level when a slick counter-attack saw Florian Kamberi release Jonny Hayes down the left, with the Irishman’s cross just out of Callum Hendry’s reach.

The Dons have been toothless in 2021, netting just nine times since the turn of the year.

Rangers have managed more than that in the last month and extended their lead after 34 minutes.

Ryan Kent got a lucky break as he went up against Connor MacLennan but from then on there was no catching the winger as he darted towards the byline, cutting back for Roofe to slot home past Lewis.

Aberdeen introduced Fraser Hornby at the break but his first involvement was to waste another big chance from a Ryan Hedges cross. Unselfishly he then teed up Lewis Ferguson to tap into an empty net but the midfielder somehow smashed the ball against the crossbar from six yards.

While the visitors continued to fire blanks, Rangers’ finishing was laser-guided. Tommie Hoban’s loose pass was pounced on by Hagi as he fed Roofe, who swept home his second with an expert low finish on the hour. 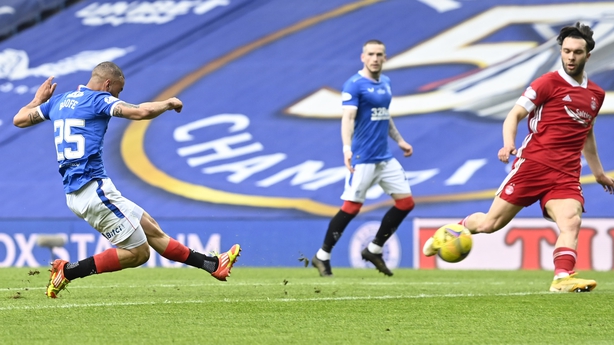 Rangers were being careless, however, and newly-crowned SPFL Player of the Year Allan McGregor had to underline his award-winning credentials with a fine block after Hedges was allowed to surge through on goal.

There was still time for Rangers to put gloss on a historic day as Greg Stewart slid in Defoe to score as Rangers ensured the party started with a bang.

Skipper Scott Brown bowed out at Celtic in a low-key goalless draw against former club Hibernian at Easter Road.

The 35-year-old midfielder, who will join Aberdeen as player/assistant next season, turned in a steady but unspectacular performance in an encounter the Parkhead club dominated without getting a goal for their efforts.

As Brown bid farewell to the Hoops after 14 years at Parkhead, a dismal season ended for the Glasgow side, who continued to search for a new manager, with Eddie Howe still the frontrunner. 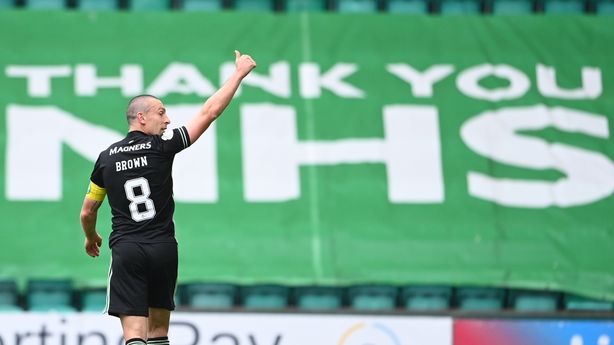 Hibs confirmed their third-placed finish in the league with a win at Aberdeen in midweek and their much-changed line-up in the final game of the season reflected their participation in next week's Scottish Cup final against St Johnstone at Hampden Park.

But they were fitting opponents for Brown’s Celtic swansong. His last game for Hibs before joining Celtic for £4.4m in 2007 had been an end-of-season win over the Hoops at Easter Road.

St Johnstone are guaranteed European football next season after they clung on to fifth place in the table with a goalless stalemate against Livingston.

The Perth outfit knew a point would be enough to keep their visitors at bay and they defended stoutly to secure the draw they needed to bring down the curtain on their league campaign.

A win in the Scottish Cup final will earn them a place in the Europa League, while a defeat will see them qualify for the Europa Conference League.