Peamount United are top of the pile after five games of the Women's National League and once again look like the team to beat.

So what is it that drives the on? What motivates a team that clinched the domestic double last season? In a word: accountability.

Having raised the standards so high, the only way to maintain a level of consistency is for each of the players to hold their team-mate responsible for any slip up.

That suits Tiegan Ruddy just fine because she wants to embrace every challenge that is put in front of her.

"At the moment at Peamount we have a winning mentality," she said ahead of Saturday evening's clash with Cork City.

"We are able to grind out results if we have to because we have that determination and grit about us. It's what winning teams need to have.

"I think the team's success in recent times is down to accountability. You'll know if you're not putting in the work but you want to work hard for your team-mates and not let them down. James [O'Callaghan, manager] really instills that in us too.

"Everyone is held accountable for what they bring to the team."

Ruddy is actually learning a new role this season. Usually she would be the one hanging back in midfield to defend against counter attacks, but now she is charged with breaking forward into the opposition's penalty area.

Having that licence to roam forward has brought the best out in the Celbridge native with two goals, one assist, and an 84% pass accuracy in four games this season. But there is more still to come from her.

"It has been a new role for me and something that I wasn't expecting. To be fair, Karen [Duggan] was the Player of the Year last season and she is playing in that more defensive role so I can have no complaints about that," she admitted.

"I'm enjoying it and playing in the team right now. We have so many good players and there is so much competition for places, which is great because it keeps everyone on their toes and gives us great options in every position."

Perhaps the most surprising aspect of Ruddy's recent form is that it is coming on the back of her return from a serious ACL injury that had kept her sidelined for some time.

Back from college in the United States, she was trying to keep herself fit with shuttle runs on the grass patch outside her home when suddenly she twisted her knee too far. The recovery period felt never-ending for the 21-year-old.

"It was very lonely at times but I had good support from the physio Mark Kenneally, who has his own set-up in Celbridge, and Daniel O'Reilly, who plays for Drogheda United, I did a lot of work with him on a one-to-one basis.

"Daniel really pushed me on. He is a great footballer in his own right so he was able to do football-specific stuff with me when I was coming back to the end of my injury. It was a huge help having that support."

It's quite clear that Ruddy, who is studying Business and Law in Maynooth University, is back up to full speed again. And her influence could just help Peamount to a sixth straight league win on Saturday. 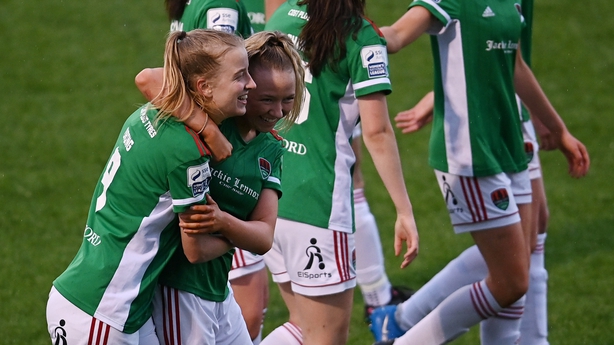 Peamount, with five wins from five, have conceded just a single goal so far. They are hot favourites to extend that winning run against a Cork side still waiting on their first win.

Three draws and three defeats means they go into this one in seventh, two points ahead of bottom-placed Treaty United. They'll require a huge performance to turn over their hosts.

Athlone are also still waiting on a first victory of the campaign having drawn two of their five games to date. They were hammered 6-0 by Peamount last weekend.

DLR Waves on the other hand come into this fixture off the back of a good 1-0 defeat of Bohs. If results go their way they could end the weekend in third.

Third-placed Shelbourne need three points to keep up the pressure on Peamount. They're three points off the leaders but can expect a tricky afternoon against an attack-minded Galway, who are sitting in mid-table.

Goalscoring hasn't been an issue for Galway, but a leaky defence has seen them cough up some points. It'll be an intriguing battle at Tolka Park.

Wexford Youths are second, two points off Peamount having played a game more. Last week they came away from Cork City with a good 3-1 win. They face a Bohs side still smarting from their loss to DLR Waves; it was a game they should have taken at least a point from.

A controversial goal sank Bohs but they also missed several good chances and will be hungry to put that right in Wexford.