Dundalk finally claimed their first Premier Division victory of the season at the expense of their Co Louth rivals Drogheda Utd at Oriel Park.

Goals in either half from David McMillan and Han Jeong-woo ensured a run of 188 days without a league win came to an end.

Chris Lyons did pull a goal back for Drogheda right at the death but it wasn't enough to deny the home side their first three points of the campaign.

This result will be a welcome tonic for those around Oriel Park after a difficult week which saw both team manager Shane Keegan and coach Filippo Giovagnoli depart the club.

Interim manager Jim Magilton has now stopped the rot to a certain extent but will know his side must be more clinical in future games to put sides away when on top.

Tim Clancy's side upped their game in the second half and could well have taken something from the game but this result means they have now taken just one point from their last three matches, although they still head their county rivals by two points in the table.

It was the visitors who had the first attempt of the game with number 17 Ronan Murray pulling a shot wide of Peter Cherrie’s goal after as many seconds.

Cherrie came into the side as one of four changes from the Dundalk side which drew 1-1 away to Derry City on Tuesday night with Albanian Alessio Abibi dropping to the bench but he would have little to do for the rest of the half as the home side began to take the game to their neighbours.

.@DundalkFC beat @DroghedaUnited to finally get a win in this year's Premier Division. Here's the highlights from Oriel Park with Stephen Alkin and @1garyrogers on co-comms #RTEsoccer pic.twitter.com/7J3rbdR39B

The first big chance fell the home side’s way on five minutes when Raivis Jurkovskis picked out McMillan at the back post but the striker could only nod wide.

There was a brief scare for the Lilywhites on 11 minutes after a mistake at the back but club captain Chris Shields did well to get back to block Chris Lyons’ effort.

Dundalk then hit the front on 24 minutes with a superb goal. Full debutant Wilfried Zahibo switched the play to release Jurkovskis on the left. The Latvian international then beat James Brown to cross for McMillan to steal in ahead of Dane Massey to head to the bottom right hand corner.

The home side could have doubled their lead on the half hour mark when Michael Duffy was played through on one one but on this occasion Colin McCabe came out on top with a fine stop to deny the Derry man.

Duffy would have another half chance five minutes later after Patrick McEleney hung up a cross from the right but he was unable to direct his header on target.

Han was lively throughout and looked like he could add to Dundalk’s lead when he broke in off the right six minutes into the second half but his left foot shot struck McMillan before spinning harmlessly out of play.

The hosts then had a nervous moment on 54 minutes when Cherrie missed his attempted punch from Murray’s corner but fortunately for Dundalk no one was on hand to punish the error as Jurkovskis cleared it with his thigh.

Darragh Markey then had another chance soon after that flashed over before Daniel O’Reilly saw an effort headed behind for a corner by Andy Boyle on 68 minutes. 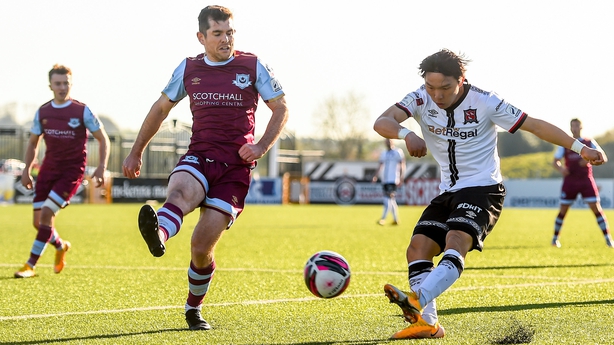 The game was then put beyond doubt on 71 minutes when Han became the first South Korean to score in the league since Jin Gu Kim scored against Dundalk for Galway Utd in a 2-2 draw in September 2011 when he turned in from McMillan’s left wing cross.

The home side still had work to do after that with Cherrie denying Lyons a route back into it four minutes later with a good save with his feet.

There was then a scare at the other end for Drogheda with five minutes to go when substitute Ryan O’Kane charged down McCabe’s attempted clearance but the bounce of the ball denied him a chance to shoot before the Boynesiders got players back to see off the danger.

McMillan then should have added his second moments later when he was teed up by Duffy only to blaze over from eight yards out.

That miss could have proved crucial when Drogheda pulled a goal back on the 90 minute mark. James Brown slipped Lyons in and he slipped a low shot past Cherrie to the bottom left hand corner.

Despite four minutes of additional time, however, the visitors couldn’t find a breakthrough to rescue a point.